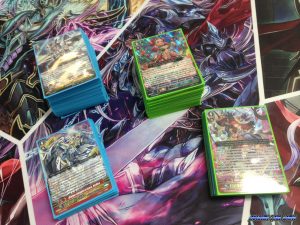 Cardfight!! Vanguard introduced the G-Zone in G Trial Deck 1: Awakening of the Interdimensional Dragon. Your G-Zone is basically an extra deck with G-Units and G-Guardians. Each G-Zone can have a total of 16 cards, and a maximum of four copies of a card. I recommend playing 12 G-Units and 4 G-Guardians in most G-Zones. Only a few decks benefit from slightly different ratios.

G-Units and Stride were introduced in G Trial Deck 1: Awakening of the Interdimensional Dragon in the English edition. G-Units are the most important cards in your deck. They generate the majority of your offense, and create interactions between you and your opponent. Their skills can overwhelm your opponent and lead you to victory. Furthermore, the G-Units in your deck depend on your archetype, clan, and strategy.

The mechanic Ultimate Stride and Zeroth Dragons were introduced in G Booster Set 13: Ultimate Stride. They are six of the strongest cards in the premium format. Zeroth Dragons are designed to win games during the turn that they are played. These powerful dragons represent each of the six nations. These nation base cards are only be played with a clan in their nations or in a deck with Gyze. I highly recommend playing one copy of your deck’s Zeroth Dragon if you can get your hands on the card. 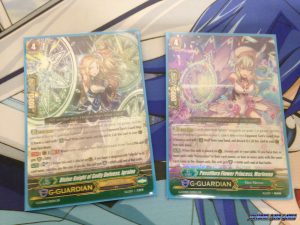 G-Guardians are special defenders from the G-Zone, and they are essential cards for your deck. G-Guardians are the second best defensive cards in Cardfight!! Vanguard’s premium format. They have special abilities to create powerful shield to block your opponent’s attacks. Bushiroad created these cards to give players a stronger defense. Furthermore, some G-Guardians’ abilities interact with your field, your deck, or your opponent.

In addition, G-Guardians help achieve higher levels of Generation Break. You can achieve Generation Break 3 faster by playing G-Guardians to protect your vanguard. Then, you can play stronger G-units on your next turn. Also, this strategy helps fulfill Ultimate Stride’s requirement for three face up cards in the G-Zone. Play your G-Guardians often to block your opponent’s best attacks to set up your Generation Break.

Check out these defensive G-Guardians!

Cardfight!! Vanguard has a variety of archetypes like most trading card games. Archetypes are extensions of the clans, and have new versions of classic characters from the series. You can think of archetypes as special teams from each clan because their effects have synergy with cards in the group. These cards share a common title in their names such as Jewel Knight and Eradicator.

Furthermore, some cards obtain two archetypes because their names contain two important titles. For example, Star-Vader Chaos Breaker Dragon is a member of the Star-vaders and the Chaos archetypes. Another well-known example is Blaster Blade Seeker because he is a Blaster and a Seeker. You have more options for playing these cards in a deck. I love playing games that offer multiple options for building decks.

Keywords are a similar to archetypes by having requirements and synergy with cards in a particular group. Each keyword is unique to its clan. The difference between keywords and archetypes is keywords are special words in a card’s text and archetypes are cards that share a title. Furthermore, the same strategy for consistency for archetypes is also used for this concept. Decks with keywords require the majority cards in the deck to share the same keyword. I recommend playing a deck with all 50 cards containing a keyword.

The premium format is more expensive than the standard format. Many important cards for this format are from old booster sets, and these set are out of print. Players have two options for obtaining classic cards for a premium deck. First, players can purchase booster boxes, and you can find good deals for certain boxes on Amazon. Second, players can test the secondary market by purchasing individual cards.

Furthermore, the best G-Units such as Zeroth Dragons are the most expensive cards in the game. Expect to spend over one hundred dollars when building your deck’s G-Zone. Zeroth Dragons are normally sold for at least $70 because they are extremely rare, and they enhance any deck. There are also strong cards such as Supreme Heavenly Emperor Dragon, Dragonic Overlord “The Purge” with a lot of value in the secondary market. The value of each card may continue to increase over time due to a lack of reprints.

The majority of cards from the original Cardfight!! Vanguard have not been reprinted. Only a few cards were reprinted in the Revival Collection Vol. 2. This booster set is an exclusive product for the English edition. It contains 79 cards from the original Cardfight!! Vanguard. Purchase this product to quickly obtain a few cards for a premium deck. You will still need to purchase order booster boxes or single cards from retailers.