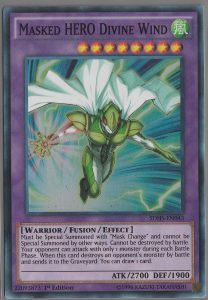 Must be Special Summoned with “Mask Change” and cannot be Special Summoned by other ways. Cannot be destroyed by battle. Your opponent can attack with only 1 monster during each Battle Phase. When this card destroys an opponent’s monster by battle and sends it to the Graveyard: You can draw 1 card.

Masked HERO Divine Wind is a powerful superhero with the power of controlling the wind. His powers aids his fellow heroes in battle by limiting attacks from evildoers! This card has never been reprinted in the English Edition. You can only get a copy of this card from a HERO Strike Structure Deck or a seller. I have a review for HERO Strike Structure Deck as it is a great product to purchase. You can get a copy of Masked HERO Divine Wind from it.

Masked HERO Divine Wind’s second effect restricts your opponent to using one monster for an attack during the Battle Phase. I like this defensive effect against many decks. This effect counters swarm decks such as Six Samurai. Your opponent may have three monsters, but only one monster can attack you. Most opponents are restricted to one attack during each Battle Phase.

However, a few cards are not limited by this effect. Blaster Luster Solider Envoy of the Beginning can attack twice each Battle Phase. He has the potential to deliver serious damage if you have multiple monsters on the field. Be aware of your opponent’s deck and field. He or she can simply ignore this card’s restrictions with the right card.

Finally, Masked HERO Divine Wind’s third and final effect draws a card when he destroys a monster by battle. This effect builds your hand’s size. You are quickly gaining access to your deck’s resources. You will be one step ahead of your opponent. If you draw a useful trap card, then you can set it during your second Main Phase.

Overall, Masked HERO Divine Wind is a great card for HERO decks. He is the perfect card to play for controlling the flow of the game.  He protects himself, restricts your opponent’s options in battle, and draws a card. Every HERO deck gains a lot of benefits from all three effects. I recommend playing at least one copy in a deck. He is a good card to play against swarm decks.