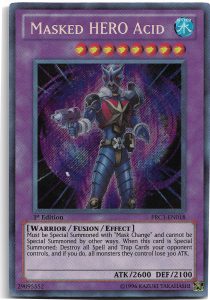 Overall, Masked HERO Acid is a great card for HERO decks. His ability to destroy all of an opponent’s Spell and Trap cards is a useful ability. You weaken your opponent’s field and strategy. He or she is unable to play a Trap card to counter your next cards. I recommend playing at least one copy of Masked HERO Acid in your extra deck.