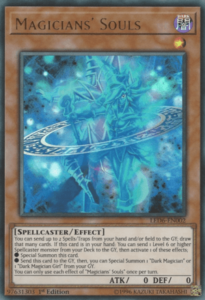 Magicians’ Souls are the souls of Dark Magician and Dark Magician Girl. This effect monster provides support for both Spellcasters. The name of Magician’s souls fits the card’s theme and effects. This card contains their souls and helps a player to special summon one of those monsters to the field. Then, the ultimate wizards join the duel!

You may send up to two Spells or Traps from your hand or field to the graveyard, and draw that many cards. This is a strong effect to draw up to two cards. You are quickly gathering resources for your strategy. Send the least valuable cards in the duel to the graveyard. You have the chance of drawing more useful cards.

Play these cards with Magicians’ Souls!

Finally, Magicians’ Souls is not only a powerful card for decks with the Dark magician. This is a powerful card in a deck with Spellcasters. Archetypes with Spellcasters benefit from the first effect to draw cards. You are gaining access to your deck’s best resources. You increase your odds of setting up your best field to win the game or counter your opponent’s strategy.

Play Magicians’ Souls with these archetypes!

Overall, Magicians’ Souls is one of the best cards to play in a Dark Magician deck. I recommend playing a full set in a deck. It has the abilities to draw cards and special summon Dark Magician and Dark Magician Girl. Its special effects add consistency to the deck. You can always summon the Dark Magician with this monster. Then, you can play additional cards to set up your strategy!