Our favorite heroes and units from Cardfight!! Vanguard G return in Extra Booster 14: The Next Stage! Extra Booster 14: The Next Stage is the fourteenth extra booster set in Cardfight!! Vanguard V. The cards in this set are played by Chrono Shindou, Shion Kiba, and Tokoha Anjou of Team Try3.  Furthermore, the extra booster set contains support for Chronojet Dragon, Altmile, Ahsha, and Blaster!

In addition, Extra Booster 14: The Next Stage is the first booster set with an Order card. Orders are powerful weapons or spells to enhance your vanguard and rear-guards. These new cards are in your main deck! 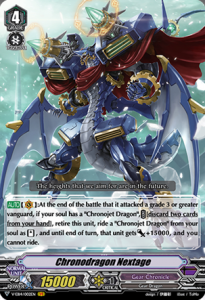 Fans of Chronojet Dragon can finally rejoice. Gear Chronicle’s poster boy and his friends return to Cardfight!! Vanguard! Some of the rear-guards in the deck gain abilities when you have a grade 4 unit on the field. 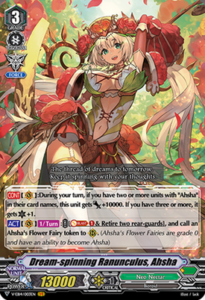 Neo Nectar is one of the strongest clans in Cardfight!! Vanguard. Extra Booster 14: The Next Stage provides new support for the clan and Ahsha. There is also new support for budget decks. The clan continues its strategy of call powerful plant tokens to the field. You want to call tokens early and often in games.

Bushiroad reintroduces Dream-spinning Ranunculus, Ahsha as a grade 3 unit with the Imaginary Gift: Force! Her special skill is superior calling an Ahsha’s Flower Fairy to the field! She gains power and deals major damage with her fairies on the field. Ranunculus Flower Maiden, Ahsha from the recent trial deck strongly supports this new style for Neo Nectar.

Royal Paladins have two new strategies for the standard format. Their first new strategy is gaining skills when all cards in the damage zone are face down. Royal Paladins’ second new strategy is superior calling grade 2 units from the deck and drop zone. This method is a great tactic to gather units without calling cards from your hand. You save cards for defense or back row.

In addition to the new vanguards, Extra Booster 14: The Next Stage introduces new critical triggers as Sentinels with a skill. We have a new option for our defense! They are not perfect guard with the ability to negate an attack. These new Sentinels have a shield of 30,000 and do not require you to discard a card. They do count towards your total number of Sentinels in a deck.

Order in The Court! 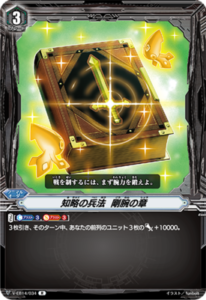 All in all, Extra Booster 14: The Next Stage is going to be one of the most anticipated booster sets from this year. All three clans receive powerful cards for new and old decks. Fans of these clans are going to be very happy players. Chronojet Dragon is back in action! Get your decks ready for the next step in Cardfight!! Vanguard!