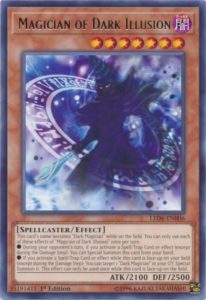 Therefore, you can consistently play a deck. Magician of Dark Illusion is a nice substitute for Dark Magician. You can play cards such as Dark Magic Attack.

Magician of Dark Illusion special summons himself from your hand after you play a Spell or Trap during your opponent’s turn. You do not need to tribute any monsters summon him. You save monsters in your hand and gain the effects from the Spell that you played moments ago.

Furthermore, I recommend a Quick-Play Spell or Trap for the activation of the second effect. Dark Magician has many useful spells and traps for his advantage. I recommend cards such as Soul Servant and Eternal Soul. You may activate them during the opponent’s turn.

Play these Spell cards with Magician of Dark Illusion:

Magician of Dark Illusion special summons a Dark Magician from your graveyard if you activate a Spell or Trap card with him on the field. You can activate this effect during either players’ turn. Two spellcasters will reside on your field.

However, you may only activate this effect once.  This limitation prevents abuse from the card. The limitation also requires players to carefully activate the effect at a good moment.