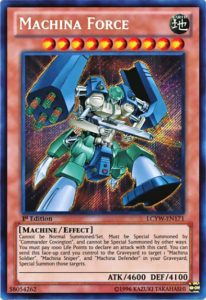 Cannot be Normal Summoned/Set. Must be Special Summoned by “Commander Covington”. You must pay 1000 LP to declare an attack with this card. You can send this card you control to the GY, then target 1 “Machina Soldier”, “Machina Sniper”, and “Machina Defender” in your GY; Special Summon those targets.

Machina Force is a machine monster with an impressive design and offense. Players will quickly notice its impressive ATK of 4,600. Machina Force has three effects. Two of these effects affect your ability to play the card to its fullest potential.

Furthermore, an opponent can easily prevent this summon. He or she may play cards such as Trap Hole and Bottomless Trap against Commander Covington, Machina Soldier, Machina Sniper, or Machina Defender. You would lose a key piece for the requirement to summon it.

You must pay 1,000 life points to declare an attack with Machina Force. That is a heavy cost for a card that requires four monsters for its special summon. You have a limited amount of times to use this effect.

On the other hand, Machina Force has 4,600. This machine can destroy almost any monster by battle. You can inflict a lot of damage to an opponent.

You have the option to send Machina Force to special summon Machina Soldier, Machina Sniper, and Machina Defender from your graveyard. Therefore, you exchange one monster for three monsters.

This effect is a useful setup for a XYZ summon or Link summon. You have three machine monsters, and all of them are level four. Two of these monsters can become material to Link summon Qliphort Genius.

Play these cards with Machina Force!

Machina Force has fantastic synergy with many generic cards for machine monsters. You can increase its ATK to extremely high levels of power. No opponent can withstand these powerful combos.

For example, Limit Removal will double Machina Force’s ATK. Machine Force will have 9,200 ATK with Limiter Removal. This powerful combo can defeat an opponent with a direct attack.

Overall, Machina Force looks impressive with 4,600 ATK, but it is a mediocre card with poor effects. I only recommend the card in casual decks. Machina Force demands too many resources to summon it, and you must pay a cost for it can attack an opponent. You may be at a disadvantage after setting the requirements for the special summon. These effects limit this card’s place to casual decks.