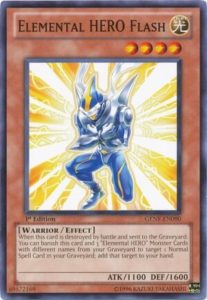 When this card is destroyed by battle and sent to the Graveyard: You can banish this card and 3 “Elemental HERO” Monster Cards with different names from your Graveyard to target 1 Normal Spell Card in your Graveyard; add that target to your hand.

Furthermore,  Polymerization is the most popular card to target with Elemental HERO Flash’s effect. You need it to Fusion Summon the best monsters from your extra deck. You always want a card such as Polymerization in your hand.

Synergy with Elemental HERO The Shining!