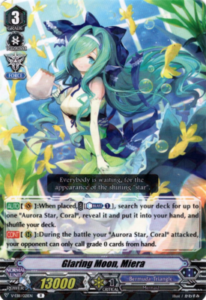 Everybody is waiting, for the appearance of the shining “star”.

[AUTO](VC):When placed, COST [Counter Blast (1)], search your deck for up to one “Aurora Star, Coral”, reveal it and put it into your hand, and shuffle your deck.
[CONT](RC):During the battle your “Aurora Star, Coral” attacked, your opponent can only call grade 0 cards from hand.

Play these cards with Glaring Moon, Miera in the standard format!

Finally, Glaring Moon, Miera does not have a lot of value in the premium format. Corals have multiple grade 3 cards for the deck. You should consistently ride a grade 3 vanguard with Coral in her name.

Glaring Moon, Miera assists you to play the correct vanguard if you really need to use her skill before striding a G-Unit. You can play Aurora Star, Coral to be the correct heart on your next turn. Then, your stronger G-Units will stride into battle.

Play these cards with Glaring Moon, Miera in the premium format!