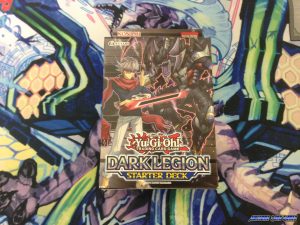 The Only New Card

Dark Legion features only one new card in the starter deck, and that card is D/D/D Dragon King Pendragon. His first effect special summons him to the field by using  one dragon and fiend as tributes from your field or hand. In addition, His second effect destroys one spell or trap card on the field. These effects are decent for a card from a starter deck. They are easy for beginners to learn.

Furthermore, you can only get D/D/D Dragon King Pendrago in a Dark Legion starter deck at the time of this article. This card has never been reprinted in English and Japanese. If you are a collector or casual player, then you can either buy the starter deck or the individual card. I recommend purchasing the card individually. This starter deck is not worth paying for at your local store.

Fortunately, there is one respectable reprint in Dark Legion. The best reprint in the starter deck is Mystical Space Typhoon. It is a timeless card that will always be played. I play it in many of my decks. The card is useful for destroying your opponent’s spells and traps.

The deck has a very simple strategy for beginners. Your goal is to special summon D/D/D Dragon King Pendragon, and use his effect every turn. In addition, you want to use every method possible to protect. This dragon carries the deck on its shoulders. You will lose many games if you are unable to summon him or protect him from your opponent’s cards.

However, this strategy has many flaws that will lead to a bad experience. You only have one copy of D/D/D Dragon King Pendragon in the deck. It is the deck’s only decent card. You will struggle with the other monsters in the deck. Those cards do not generate an advantage to win many games. Most starter decks can easily beat this deck.

Konami poorly constructed Dark Legion into a bad product. The starter deck only features one new card for the D/D and D/D/D archetypes. It seems strange for any new product to feature only one card from an archetype. The developers should have created at least two or more new cards in this deck. They also should have reprinted D/D  monsters and support. Dark Legion could have been considered a great product if it featured more D/D and D/D/D cards.

Finally, these problems are the reasons for the starter deck’s horrible strategy. The exclusive card does not have proper support. This causes the deck to be very inconsistent. New players and veterans are unlikely to have a good experience from this starter deck. It lacks a lot of substance for a new deck.

Overall, Dark Legion is one of the most disappointing starter deck in Yu-Gi-Oh’s history. Most of the classic care are mediocre and do not enhance decks. Konami misses a great opportunity to re-release  or create more new D/D/D monsters and support. There was a lot of potential to create a solid starter deck for D/D/D Dragon King Pendragon. Unfortunately, Konami failed on all levels to make a respectable starter deck.