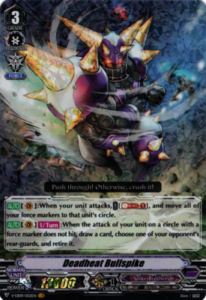 Push through! Otherwise, crush it!

[AUTO](VC):When your unit attacks, COST [Soul Blast (1)], and move all of your force markers to that unit’s circle.
[AUTO](VC)1/Turn:When the attack of your unit on a circle with a force marker does not hit, draw a card, choose one of your opponent’s rear-guards, and retire it.

Furthermore, this ability works well with Imaginary Gift: Force I. The power stacks from Force 1, and the critical from Force 2 does not stack. You want the type of gift that stacks power. You can create very powerful columns with every unit.

Furthermore, this ability does not have any setbacks if an attack is a success or failure. You will be rewarded an extra draw. You can build your hand for more offense or defense to defend your vanguard. One to three cards can potentially be added to your hand from this ability.

Play these cards with Deadheat Bullspike in the standard format!

Play these cards with Deadheat Bullspike in the premium format!