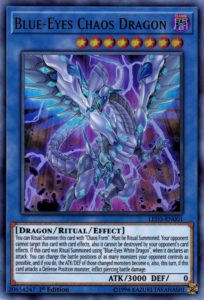 Blue-Eyes Chaos Dragon requires Chaos Form and monsters whose total levels exactly equal eight for its Ritual Summon. These requirements are easily to fulfill. You only need one level eight monster such as Blue-Eyes White Dragon and Chaos Form. You may also use multiple monsters with all of their levels equaling eight or more.

Therefore, this monster is not an easy card to destroy. Cards such as Dark Hole and Raigeki cannot destroy Blue-Eyes Chaos Dragon. An opponent’s best option is to destroy it by battle with a powerful monster.

In addition, Blue-Eyes Chaos Dragon inflicts piercing battle damage to a monster in defense position. An opponent cannot avoid damage from this monster. The position of an opponent’s monster before you activate this effect does not matter. You have complete control in this situation.

Furthermore, Blue-Eyes Chaos Dragon will inflict 3,000 damage to an opponent. The opponent loses nearly half of his or her life points. You are in a great position to control the flow of the game. An opponent cannot avoid damage, due to the piercing battle damage.