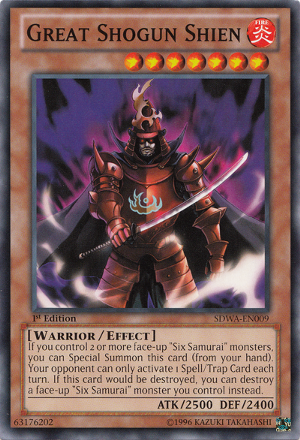 Bow down to a great and powerful military governor of the Six Samurai! He commands his troops with an iron fist, and his enemies fall to his mighty blade! He will lead them into battle and spam them onto the battlefield! Come Fourth! Great Shogun Shien!

Furthermore, Great Shogun Shien has a very nasty effect. His effect limits an opponent to one spell or trap card activation per turn, and this will slow down many decks especially ones that heavily rely on spell cards such as Spellbooks. An opponent must think twice before playing a spell or trap for the play can give maximum impact to regain advantage.

Furthermore, he has some protection from destroy by battle. The Six Samurai stand tall for their military governors. They are willing to sacrifice their lives for the greater good to achieve ultimate victory! A player can destroy another Six Samurai monster they control instead. There are normally two Six Samurai monsters on the field with Great Shogun Shien because of his special summon effect so he has soldiers to sacrifice. This makes it more difficult to destroy the Great Shogun Shien and ending his very restricting effect.