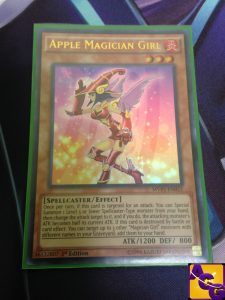 Once per turn, if this card is targeted for an attack: You can Special Summon 1 Level 5 or lower Spellcaster-Type monster from your hand, then change the attack target to it, and if you do, the attacking monster’s ATK becomes half its current ATK. If this card is destroyed by battle or card effect: You can target up to 3 other “Magician Girl” monsters with different names in your Graveyard; add them to your hand.

Apple Magician Girl was introduced with the Magician Girl archetype in Yu-Gi-Oh! The Dark Side of Dimensions Movie Pack. She is only available in this booster set. Each Magician girl from this set has a fruit in her name. These powerful ladies share a similar skill to special summon Spellcasters to the field. Apple Magician Girl has many tricks up her sleeves like every good magician.