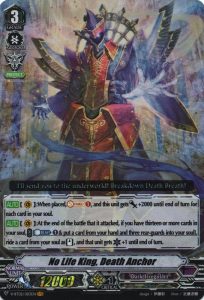 I’ll send you to the underworld! Breakdown Death Breath!

Dark Irregulars soul charge cards to build their winning image. Their skills will either soul charge cards or activate an ability if you have a certain amount of cards in the soul. No Life King, Death Anchor needs at least 13 cards in the soul to unleash his signature ability. You will need to play cards such as Blood Sacrifice, Ruthven and Werbear Verfolger. They will provide your soul with cards.

Play these cards with No Life King Death Anchor!