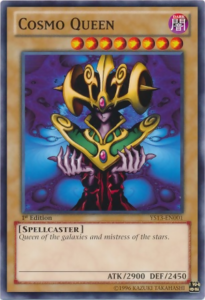 Cosmo Queen is the queen of spellcasters. Her stellar stats are impressive for a classic card from the early days of Yu-Gi-Oh! Cosmo Queen is one of the strongest normal monsters in Yu-Gi-Oh! Her ATK is greater than the ATK of cards such as Dark Magician and Giga the Fierce Knight. She is a powerhouse in battle.

Unique History in the TCG

Cosmo Queen was a difficult card to find in the TCG for many years. Cosmo  Queen was first released in a happy meal from McDonald’s in the TCG. This rarity of this card is an ultra rare card. Kids needed to be very lucky to pull her from a happy meal of all places. Thankfully, Konami released Cosmo Queen Legendary Collection 3: Yugi’s World Mega Pack in 2012.

Cosmo Queen is a normal monster without any special effects. She has the highest ATK of normal spellcasters. Cosmo Queen can easily destroy many monsters in battle! A direct attack from the queen of spellcasters will deplete more than a quarter of an opponent’s life points.

Play these cards with Cosmo Queen!

Play these Spellbooks with Cosmo Queen!

Overall, Cosmo Queen has a high amount of offense, but fails to deliver an advantage. Cosmo Queen has limitations like many normal monsters. She depends on supportive cards to special summon her and protect her from your opponent. The only impressive features of Cosmo Queen are her high stats. She is very unlikely to see any time in competitive decks.