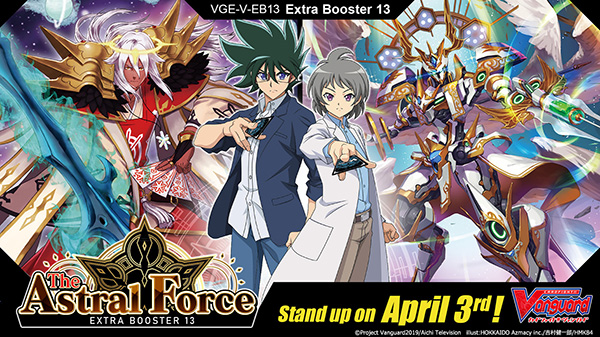 V Extra Booster 13: The Astral Force is the thirteenth extra booster set for Cardfight!! Vanguard V. It features new cards for Angel Feather, Genesis, and Gear Chronicle! Each clan has new strategies and vanguards for new decks. Shinemon Nitta and Tatsuya Tachibana play the cards from this extra booster set in their decks. You can see these cards in action in Cardfight!! Vanguard V! 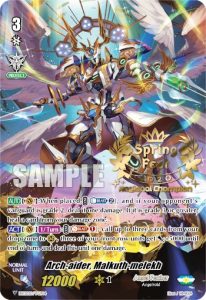 Arch-aider, Malkuth-melekh is Angel Feather’s featured card in V Extra Booster 13: The Astral Force. This powerful vanguard manipulates the damage zone, and his first skill has the potential to deal damage to an opponent. The most impressive ability from this card is superior calling units from the drop zone. Arch-aider, Malkuth-melekh uses the drop zone and damage zone to his advantage. You gain new units and deal a damage check with the potential of checking a trigger! 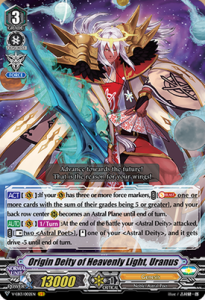 Furthermore, there are new units to generate Force markers! Dikei of the Just Path is one of the best cards for Genesis in V Extra Booster 13: The Astral Force. Dikei adds up to two Astral Poets in your hand. Then, you gain an Imaginary Gift:Force if you revealed two Astral Poets. His skill has amazing synergy with the deck. He adds consistency for riding a grade 3 and generates Force markers. 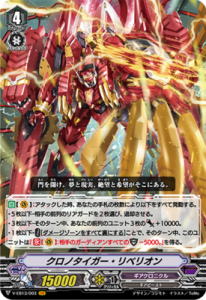 Chronofang Tiger and classic units in Gear Chronicle are back and ready to rumble in Cardfight!! Vanguard V’s standard format. Chronofang Tiger’s skill is based on Stride from Cardfight!! Vanguard. The skill requires you to discard cards with the sum of their grades being 3 or great, and you superior ride a grade 4 unit from the deck. You can superior ride the new Chronotiger Rebellion or Interdimensional Dragon, Mystery-flare Dragon.

V Extra Booster 13: The Astral Force includes many amazing cards for Angel Feather, Genesis, and Gear Chronicle!  You can play Shinemon Nitta’s and Tatsuya Tachibana ‘s new cards! Each clan has new strategies and decks. In addition, Protect 2 finally has support to make it a useful marker. Players have an incentive to now play Protect 2. V Extra Booster 13: The Astral Force is set to be released on April 3, 2020 for the English format!