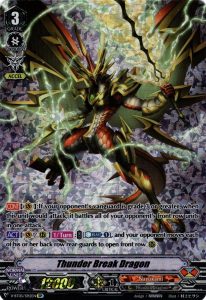 I will annihilate all of them with my lightning until only one remains!

[CONT](VC):If your opponent’s vanguard is grade 3 or greater, when this unit would attack, it battles all your opponent’s front row units in one attack.
[ACT](VC/RC)1/Turn:COST [Counter Blast (1)], and your opponent moves each his or her back row rear-guards to open front row (RC). (They move even diagonally)

Thunder Break Dragon’s effect allows him to battle all of your opponent’s front row units if your opponent’s vanguard is grade 3 or greater! This effect is great for retiring your opponent’s rear-guards by battle. Momentum swings in your favor as your opponent loses key resources. In addition, a wise opponent would not waste any guardians for his or her rear-guards. Instead, he or she will focus on defending the vanguard from your attack.

Furthermore, Thunder Break Dragon’s second effect moves your opponent’s rear-guards in the back row to the front row. Those cards are now in position to be attacked by your vanguard. You have the potential to retire those unis by battle. In addition, you are moving units (grade 1) without the ability to intercept attacks to the front row. Your opponent will not be able to use those units as interceptors!

Overall, Thunder Break Dragon is a great card for a budget deck for the standard format. I love the potential in this card. I also recommend playing him as a backup vanguard in any Narukami deck. Narukami has a good amount of cards to support him. Surround him with a strong cast of rear-guards, and you have a respectable formation of units.