I pre-ordered the new trial decks Divine Knight of Heavenly Decree and Flower Princess of Abundant Blooming on Amazon. Flower Princess of Abundant Blooming did not fail to disappoint me. The deck includes 50 cards and the extra deck has two copies of the new G-Unit. Neo Nectars under Ahsha have become one of the best clans. Their bloom ability can create ridiculously strong attacks. I wanted this trial deck to upgrade my Neo Nectar deck with Ranunculus Flower Maiden, Ahsha. 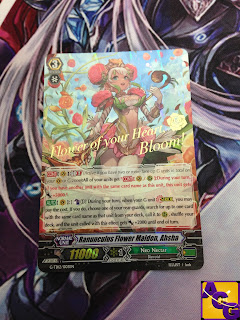 Ranunculus Flower Maiden, Ahsha was reprinted for the third time. I love her new art much more than her original art. She looks more mature with a bright facial expression and the card is more colorful than her darker art. I do not mind Ahsha getting a reprint over her new card in TRY3 Next. She is a great card to have in your Neo Nectar deck. Her skills are very effective. Reprints give easier access to cards for new players. New players can buy two trial decks and have a complete set of Ranunculus Flower Maiden, Ahsha.

Flower Princess of Faith, Celine is the new G-Unit from the trial deck. Her skill works well with Ahsha’s ability. She is exactly what Neo Nectar decks need if the player does not have any rear-guards to clone o the field. She calls a card from your hand. Then, you may use Ahsha’s skill to superior call a copy of the new rear-guard. It is a very basic combo for new players. New players can easily learn Neo Nectar’s strategy.

Irrigating Maiden, Ramona is one of the few cards without the Bloom ability, but her skill supports cards with Bloom. She gains 2,000 power if you have two more units with the Bloom ability on the field and if her attack hits, you may draw a card with Bloom among your deck’s top five cards. She adds more pressure on your opponent. You can gain a free card if he or she allows Ramona’s attack hit the vanguard. She is a nice card for a deck on a budget.

Flower Princess of Abundant Blooming has everything that I want from a trial deck. Every new card has value for its respected clan and archetype. There is not a single useless card in the box. The trial deck’s high value makes it a great product for new players and veterans. Veterans like myself will test the new cards to discover their value in the current format. New players will quickly learn Neo Nectar’s strategy. I can use it to build a budget deck or use its best cards to build a competitive deck. Be sure to check out my card fights with my improved Neo Nectar on YouTube!