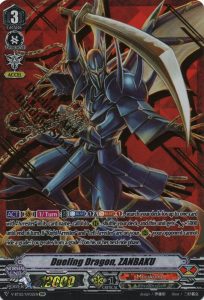 A serious battle face-to-face. I’ll not allow you to escape.

[ACT](VC)1/Turn:COST [Counter Blast (1) & Soul Blast (1)], search your deck for up to one card with “Arrester” in its card name, call it to (RC), shuffle your deck, and this unit gets [Power]+5000 until end of turn. If “Right Arrester” and “Left Arrester” are on your (RC), your opponent cannot ride a grade 3 or greater from a grade 3 on his or her next ride phase.

Dueling Dragon, ZANBAKU is one of the scariest cards Cardfight!! Vanguard’s standard format. He is a fierce warrior with an amazing skill. His partners are the Arresters. This powerful trio of warriors can dominate a game at a moment’s notice. Their opponents will be powerless to stop them. Only strong players can withstand Dueling Dragon, ZANBAKU’s amazing power.

Dueling Dragon, ZANBAKU’s skill superior calls an Arrester from your deck, and prevents your opponent from riding a grade 3 or greater card on his or her next turn. This skill requires Right Arrester and Left Arrester to be on your rear-guard circles. Then, Right Arrester’s skill activates when he is called to the field, and your opponent’s vanguard cannot stand on his or her next turn. This combo is one of the best defensive plays in the game. It prevents your opponent’s vanguard from attacking, and a new vanguard cannot replace it.

Finally, only a few cards can bypass Dueling Dragon, ZANBAKU and the Arresters. First, White Hare in the Moon’s Shadow, Pellinore can superior ride during the battle phase. However, a rear-guard must hit Zanbaku to trigger Pellinore’s ability. Second, Sage of Guidance, Zenon superior rides a grade 3 from the top of the deck. However, his skill is very inconsistent, and do not solely rely on him to bail me out of trouble.

Overall, Dueling Dragon, ZANBAKU is almost every player’s worst nightmare. He and his Arresters shut down the opposition. Avoiding your opponent’s vanguard for an entire turn by tip the game in your favor. You are taking away a player’s most instrumental card on the field.  When your opponent is trapped in chains, unleash Dueling Dragon, ZANBAKU’s Dueling Art Blinding Slash!