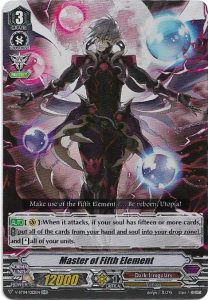 Make use of the Fifth Element…… Be reborn, Utopia!

[AUTO](VC):When it attacks, if your soul has fifteen or more cards , COST [put all of the cards from your hand and soul into your drop zone], and [Stand] all of your units.

Furthermore, this skill requires 15 cards in your soul. You must also discard all cards in your hand and soul blast all cards from your soul to activate the skill. The cost is very heavy to balance the card. It can be worth it for a final push to the win game. He gives you one last chance to win if you are in a tight spot.

Master of Fifth Element requires perfect timing to defeat your opponent. If the opponent has very few cards in his or her hand, then play Master of Fifth Element to the seal deal. He should be your second and final vanguard of the game. You are surrendering all of your resources for one chance to win the game. It is all or nothing at this point. Your chances of surviving your opponent’s next turn are very slim to none.

Play these cards with Master of Fifth Element in the standard format!

Unfortunately, Master of Fifth Element does not fit in the premium format. His skill is an ineffective ability in this league. A G-Unit is a far superior option than Master of Fifth Element’s skill. You would gain a larger advantage with a G-Unit. It has triple drive and strong skills to enable a better offense.