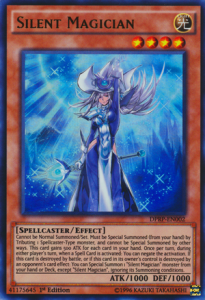 Cannot be Normal Summoned/Set. Must be Special Summoned (from your hand) by Tributing 1 Spellcaster-Type monster, and cannot be Special Summoned by other ways. This card gains 500 ATK for each card in your hand. Once per turn, during either player’s turn, when a Spell Card is activated: You can negate the activation. If this card is destroyed by battle, or if this card in its owner’s control is destroyed by an opponent’s card effect: You can Special Summon 1 “Silent Magician” monster from your hand or Deck, except “Silent Magician”, ignoring its Summoning conditions.

Silent Magician negates the action of a Spell card during either player’s turn. This effect is very powerful. You may activate her skill at any time during a turn. Silent Magician counters your opponent’s strategy. This effect also does not have a cost.

Play these cards with Silent Magician!