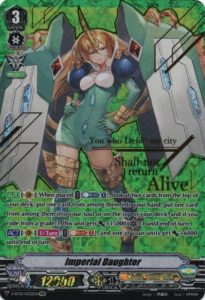 You who Defile my city
Shall not return Alive

I have not played decks of a few particular clans. Oracle Think Tank is one of those clans. I never had any interest in playing them. The art, characters, and skills did not appeal to me. My opinion has changed under the new game. Imperial Daughter’s art, skills, and character are fantastic. She is a serious character with a lot of power. She also has the Protect gift for the perfect defense.

Play these cards with Imperial Daughter in the standard format!

You have the incentive to ride her multiple times to build your resources. You will draw an additional card and get a Protect gift. I will always ride her on the vanguard circle every time I get a chance. She gives you a huge advantage. Protect is a great gift to have in your possession. Sometimes you will have an unlucky game, and will not draw any perfect guards from the deck. Protect corrects the bad luck by becoming the perfect guard.

Overall, Imperial Daughter is a great card. She generates a lot of advantage by drawing extra cards and manipulating your deck. Her second ride will put a lot of pressure on your opponent. Her power rises to 26,000 power when she rides on a grade 3 vanguard. Her second skill is useful for adding more power to units. I am very excited to build my first Oracle Think Tank with Imperial Daughter as my vanguard.