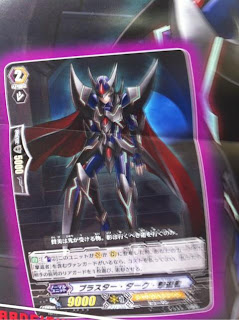 Blessed are those who receive the light. Shadow has but one way it must go.
AUTO]:[Counter Blast (2)] When this unit is placed on (VC) or (RC), if you have a vanguard with “Revenger” in its card name, you may pay the cost. If you do, choose one of your opponent’s rear-guards in the front row, and retire it.
I must say that I am a bit disappointed in his skill. The good thing is that his skill is not limited to the Vanguard circle like his previous version. However, the bad news is his lack of defense. Blaster Dark Revenger does not receive an additional 1,000 power from his skill like the original Blaster Dark. Blaster Dark’s defense made it difficult for Blaster Blade to use Wingal Brave’s skill. Overall it appears to be atleast a decent card.
Which one do you like more the original Blaster Dark or the new Blaster Dark Revenger?