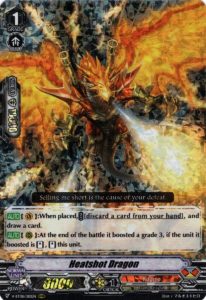 Selling me short is the cause of your defeat.

[AUTO](VC):When placed, COST [discard a card from your hand], draw a card.
[AUTO](RC):At the end of battle it boosted a grade 3, if the unit it boosted is [Stand], [Stand] this unit.

Heatshot Dragon discards a card from your hand and allows you to draw a card. You may only activate this ability when you ride him as your vanguard. The ability allows you to cycle through your resources.  Your hand ditches one card in hopes for a better card for the game.

Furthermore, this ability helps you in the early game if your hand lacks a grade 2 or grade 3 card. It offers the possibility of correcting your hand. This useful tactic prevents being locked on the wrong grade when the opponent has a vanguard with a higher grade than you.

Heatshot Dragon is one of the best boosters for Kagero. Heatshot Dragon stands himself after battle if it boosted a grade 3 unit and the same grade unit in the column stands itself. This generic ability ensures you to have a booster ready for your vanguard at all times.

Play these cards with Heatshot Dragon in the V-Premium Format!

The over trigger, Dragon Deity King of Resurgence, Dragveda also triggers Heatshot Dragon’s ability. These cards have a unique interaction in battle. This over trigger stands your vanguard. Your Heatshot Dragon in the same column will also stand.

Play these cards with Heatshot Dragon in the Premium Format!

All in all, Heatshot Dragon is a fantastic rear-guard for Kagero. This card is a nice addition to decks, and I recommend playing two to four copies of it if you have room in your deck. This unit complements the clan’s most aggressive units with the ability to stand themselves. Heatshot Dragon provides resources for your deck’s consistency and offense.