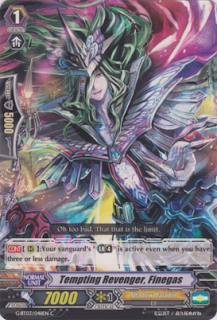 Limit Break Enablers were introduced in the Legion era. Their sole purpose is to allow Limit Break to be online regardless of its player’s damage. They helped players keep on par with Legion. Units with Legion are able to active their skills earlier in games because they do not have any restrictions on their damage. Limit Break decks had a chance to win games with the opportunity to use their skills earlier in games. However, the game has changed in just a few minutes. We are in a new era with G-Units and Stride Generation. G-Units are dominating vanguard with a force and players are striding as much as possible in almost every game.

Stride has greatly changed the game. Most decks’ strategies are to Stride as much as possible and win games with their grade three vanguard’s skills. A player is not going to activate Limit Break early in most games. Their G-unit will be doing most of the work, and the player will have at least four damage near the game’s conclusion. Stride provides more advantages than Limit Break. The triple drive gives you access to more cards and a higher chance of checking triggers. G-units typically have stronger skills than most Limit Break units.

A Limit Break enabler’s ability will not be put to use during the turn that you play your G-unit. The player will be at four or five damage when the time arrives to use Limit Break. An enabler will only serve as a 7K booster on the field. Its effect will not give you an offensive advantage on the turn that you stride your G-unit. You can gain momentum with cards that can activate their skills.

Limit Break enablers are robbing space from more valuable cards in decks. You are required to play four copies if you are only focusing on Limit Break skills. Every deck needs 4 perfect guards. Your grade one lineup’s space is greatly reduced by playing two full sets of required cards for consistency. I will not be playing an enabler in any deck with Limit Break and Stride. My grade one lineup will include more cards to assist all of my units.

Unfortunately, Limit Break enablers are very vulnerable in particular games. Opponents can easily counter Limit Break decks with enablers. They cannot resist opponent’s skills. They can be retried or locked. Thus, they will not be on the field to activate their skills or they would be locked into submission. Kagero, Link Joker, Narukami, and decks with killers like Blaster Blade will cause problems early in a game.

I like Bushiroad giving support to Limit Break cards. Limit Break enablers were a good idea during the Legion era to help Limit Break decks stay on par with Legion. However, they simply are not effective in the Stride Generation. Players are playing their G-units during the mid-game and a Limit Break enabler’s skill will be useless during this turn. I could activate Limit Break with an enabler on the field, but I would rather play my G-units at this stage in a game. I also want a rear-guard on the field that can use it effects alongside my G-unit. I will have at least four damage by the time I let my grade 3 vanguard take over the game. My Limit Break is online and ready to push for the win!