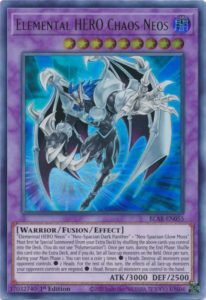 Elemental HERO Neos” + “Neo-Spacian Dark Panther” + “Neo-Spacian Glow Moss”
Must first be Special Summoned (from your Extra Deck) by shuffling the above cards you control into the Deck. (You do not use “Polymerization”). Once per turn, during the End Phase: Shuffle this card into the Extra Deck, and if you do, Set all face-up monsters on the field. Once per turn, during your Main Phase 1: You can toss a coin 3 times.
● 3 Heads: Destroy all monsters your opponent controls.
● 2 Heads: For the rest of this turn, the effects of all face-up monsters your opponent controls are negated.
● 1 Head: Return all monsters you control to the hand.

Elemental HERO Neos has many fusions and one of his fusions is Elemental HERO Chaos Neos. Chaos is the perfect name of this card. It causes havoc on the opponent or yourself. This fusion monster gambles your chances of victory with a unique effect.

Elemental HERO Chaos Neos is a difficult monster to summon due to his requirements. This monster requires contact fusion with three monsters on the field for the cost. These monsters are Elemental HERO Neos, Neo-Spacian Dark Panther, and Neo-Spacian Glow Moss.

Miracle Contact is the best card for the fusion summon of Elemental HERO Chaos Neos. This spell card uses material from the hand, field, and graveyard. Yo do not need the monsters on the field for the fusion. You can protect the materials in your hand or use the monsters in the graveyard. Miracle Contact returns the materials to the deck and fusion summons Elemental HERO Chaos Neos!

An effect with a gamble is not an ideal requirement. It is not worth the risk in a competitive match. A positive outcome provides a nice advantage. On the other hand, a negative outcome hurts your chances of winning the duel.

The best outcome destroys all of the opponent’s monsters, and you must flip a coin on heads for three consecutive times. Elemental HERO Chaos Neos swings the momentum of the game. The opponent does not have any monsters. On the other hand, you have a powerful monster and you can unleash a direct attack.

This effect is a strong ability against swarm decks. Elemental HERO Chaos Neos destroys the opponent’s monsters and counters their strategy. The opponent is wide open and you have an opportunity to deal massive damage with a direct attack.

However, this effect the is least likely outcome. This effect has 12.5% probability of success. You must strike luck from Joey Wheeler.

Furthermore, this effect is a major advantage for you. Your cards will be able to activate their effects or attack the opponent without inference from most cards. Only spells and traps can counter your actions.

For stance, this effect is an effective ability against monsters with powerful effects. Elemental HERO Chaos Neos counters cards such as Neo-Spacian Grand Mole. These monsters are unable to activate their effects to respond to your actions.

This effect is the worst outcome. Elemental HERO Chaos Neos puts you at a severe disadvantage. You lose all of your monster and you have already used three cards to special summon this monster.

Therefore, Elemental HERO Chaos Neos is not worth the risk. It would be very difficult to recover your ground after this effect. The opponent can easily win the game due to your lack of cards.

This card is a member of three archetypes due to his unique name. Elemental HERO Chaos Neos has support from Chaos, Elemental Hero, and Neos. You can create unique decks for this card with the large amount of options.