Cardfight!! Vanguard was changed forever with the introduction of the G-Unit. G-Units were one of the final mechanics introduced in the G-format. G-Units are some of the strongest cards in the game and ever decks need G-Units in premium format. They are designed to give you major advantages to overwhelm your opponent. They are equipped with triple drive and powerful effects. G-Units support their entire clan or a specific archetype within their clan.

These are my standards for G-Units. 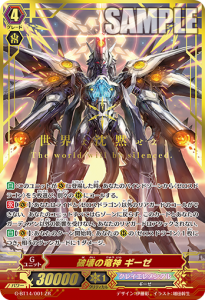 The god of destruction, Gyze will silence the world to create peace and harmony. Dragon Deity of Destruction, Gyze breaks the rules and foundations of vanguard. He is a vanguard with 30,000 power and will remain as your vanguard instead of returning to the G-Zone. He superior calls five of the six Zeroth Dragons as rear-guards to the field. His signature skill seals the deal for your victory. He deals one point of damage for each Zeroth Dragon on the field to your opponent. The skill deals five damage to win the game.

2. Zeroth Dragon of End of the World, Dust 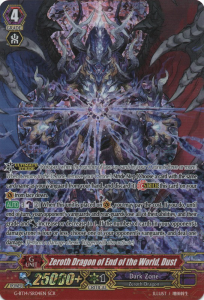 Zeroth Dragon of End of the World, Dust pushes your opponent into a corner of despair. Your opponent’s vanguard’s power and grade are one. Its skill makes defending your vanguard very difficult. Your opponent cannot call G-Guardians for defense. Then, it gets worse. Dust deals one point of damage to your opponent if he or she has four or less damage. 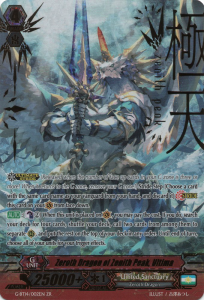 My one and only Zeroth Dragon is the powerful Ultima. This Zeroth Dragon superior calls two units and you will place any two cards from the deck on top of the deck. You are setting up your winning image. I always put a stand trigger and critical trigger on top of my deck. My rear-guards will get a second opportunity to attack my opponent, and they will be supercharged with a critical trigger to deal extra damage. 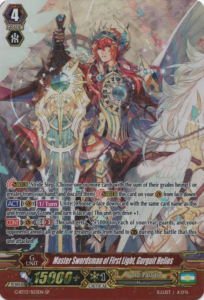 Master Swordsman of First Light, Gurguit Helios is the magnification of Gurguit’s G-Units. You may be surprised to see this card ranked number four on my list. Hear my stance for my favorite deck from Cardfight!! Vanguard G. Gurguit Helios gains quadruple drive after triggering Unite, and Unite is the easiest keyword to activate besides Darkness. The skill’s cost is flipping a copy of Gurguit face up. Then, Gurguit Helios raises his power to 25,000 and your opponent cannot negate the attack with a grade one Sentinel (perfect guard). 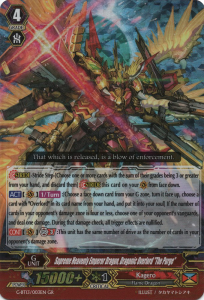 The Purge is never ending. Supreme Heavenly Emperor Dragon, Dragonic Overlord “The Purge” is arguably the best G-Unit for Kagero. It is able to deal one damage to your opponent. Then, it has the same number of drive checks as cards in your opponent’s damage zone. You can gain quintuplet if your opponent has five damage! 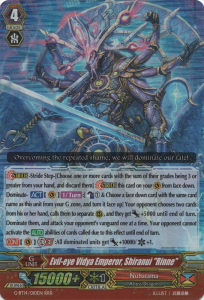 Evil-eye Vidya Emperor, Shiranui “Rinne” is the dominant and ultimate Nubatama. Your opponent cannot hide from Shiranui. Shiranui forces your opponent to call cards from his or her hand, and then he dominates those units. If you have achieved Generation Break 3, then all dominated units gain 10,000 power and an additional critical. You can unleash a wave of dominant attacks at your opponent and one hit can spell their defeat! 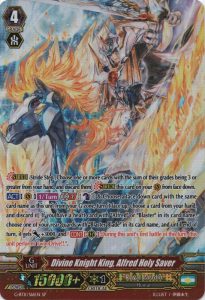 Divine Knight King, Alfred Holy Saver is the best G-Unit from the legend decks. You may play this card in either a Blaster deck or an Alfred deck. His ability gives any rear-guard with Blaster Blade in its name twin drive. You will perform five drive checks in a single turn. The odds of checking triggers greatly increase with the additional two drive checks. You will also build a very strong hand to defend your vanguard against your opponent. 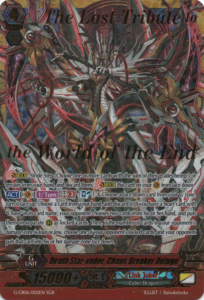 Chaos Breaker Dragon is one of the best villains in the original Cardfight!! Vanguard anime, and his cards will not disappoint you. Each version of the jester is a fantastic card for its era. His final form is Death Star-vader, Chaos Breaker Deluge. This wicked G-Unit locks your opponent’s cards from his or her hand, retires a locked card, and deals damage by sending a locked card to the damage zone. Your opponent will drown in despair in Chaos Breaker Dragon’s hands.

9. One who Hunts Souls, Balaam 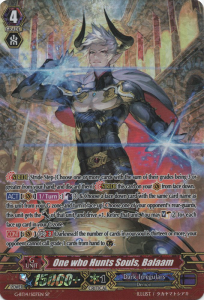 One who Hunts Souls, Balaam quickly begins to dominate the opposition as soon as he hits the field. Balaam sucks the life out of your opponent’s rear-guard. He gains it power and retires it. Then, he gains an extra drive check for quadruple drive. His Generation Break prevents your opponent from calling grade one units to the guardian circle. 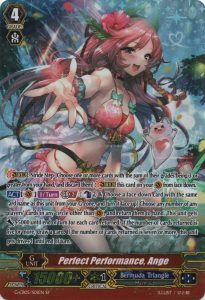 Perfect Performance, Ange is the poster-girl for Bermuda Triangle. Ange’s beauty and skills dominate the competition. Her skill returns cards from both players’ fields to their hand. Then, she gains 5,000 power for each card returned and an additional drive check if you return at least seven cards. Her skill bypasses Lock and you can return locked cards to your hand. Her skill states you are returning players’ cards (not units) to the hand.