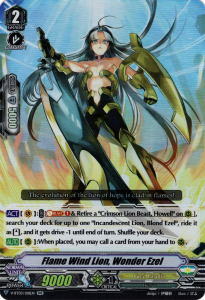 The evolution of the lion of hope is clad in flames!

Flame Wind Lion, Wonder Ezel’s first skill superior rides Incandescent Lion, Blond Ezel from your deck. This skill is amazing for Blond Ezel. You will superior ride a grade 3 unit during your second turn. In addition, you also gain an Accel marker in the early game. The Accel circle adds more power to your offense. Incandescent Lion, Blond Ezel and his fellow Gold Paladins unleash a strong wave of attacks at your opponent’s weaker vanguard.

Flame Wind Lion, Wonder Ezel’s second skill has synergy with Gold Paladins from Cardfight!! Vanguard V. Many Gold Paladin units’ skill triggers when they are called to the field by an effect. One of the best cards to superior call is Listener of Truth, Dindrane. You gain a card for calling Dindrane by an effect. Furthermore, you are also setting a strong rush at your opponent by superior calling more units.

Finally, Flame Wind Lion, Wonder Ezel is also a strong card to play in the premium format. His ability to superior calling Incandescent Lion, Blond Ezel allows you to save cards for stride. Only use your grade 3 cards in you hand for paying the cost to stride G-Units. Furthermore, he also enables Unite for Gold Paladins from Cardfight!! Vanguard G. There are useful cards with Unite such as  Knight of Autumn Light, Regan and Knight of Spring’s Light, Perimore.

Overall, Flame Wind Lion, Wonder Ezel is a nice centerpiece for an Blond Ezel deck in both formats. His skill superior rides Incandescent Lion, Blond Ezel as your new vanguard. Then, you gain an Accel Marker to enhance your offense. I am really impressed by Bushiroad. I hope they continue to create quality support for Blond Ezel.