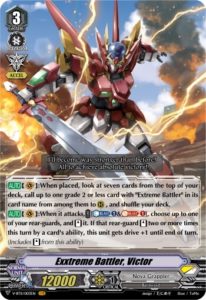 I’ll become way stronger than before! All to achieve absolute victory!

[AUTO](VC):When placed, look at seven cards from the top of your deck, call up to one grade 2 or less card with “Extreme Battler” in its card name from among them to (RC), and shuffle your deck.
[AUTO](VC):When it attacks, COST [Counter Blast (1) & Soul Blast (1)], choose up to one of your rear-guards, and [Stand] it. If that rear-guard [Stand] two or more times this turn by a card’s ability, this unit gets drive +1 until end of turn. (Includes [Stand] from this ability)

Play these cards with Exxtreme Battler, Victor in the standard format!

Exxtreme Battler, Victor is a good vanguard and heart for Nova Grapplers in the premium format. He offers two advantages for players. First, he gives an Imaginary Gift: Accel. Second, his first ability adds a rear-guard from the deck to the field.

Furthermore, the archetype of Victor has powerful G-Units. Favorite Champ, Victor stands rear-guards for multiple attacks and he stands himself for an additional attack. These units unleash a powerful force of offense, and they push the opponent into a corner.

Play these cards with Exxtreme Battler, Victor in the premium format!