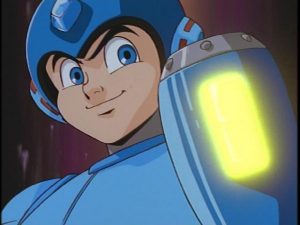 I enjoy watching the Mega Man 1994 TV Series. It pays great respect to the series and adds more personality to our favorite characters. Mega Man, Roll, and Dr. Light protect the world and often New York city from the evil Dr. Wily and his Robot Masters. The series introduces concepts that are added in the video games. There are also a few changes from the video games’ original content. 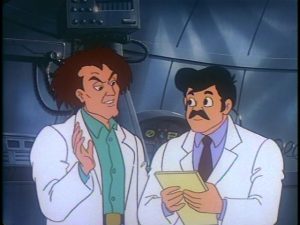 2. Proto Man does not have his signature shield. 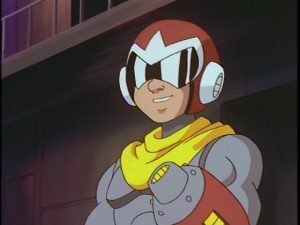 The creators designed the characters close to their original designs. Proto Man’s design is missing a key item. His shield is not present in the show. This choice is very strange because Proto Man’s shield is part of his character. He uses it to give himself extra protection because his core is unstable. Mega Man can also obtain his shield in Mega Man 7!

3. A special meteor is similar to the Double Gear System. 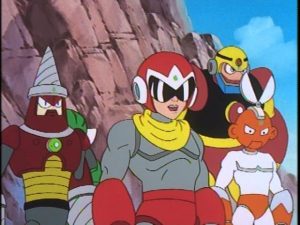 A Special meteor with unknown properties lands on the Earth. Dr. Wily soon discovers this meteor is an energy source and the meteor enhances a robot’s strength. However, it also has the same defect as the Double Gear System. The meteors can also overload a robot’s system. Mega Man overheats after overextending the meteor’s energy.

4 Sigma’s name is misspelled as Cigma. 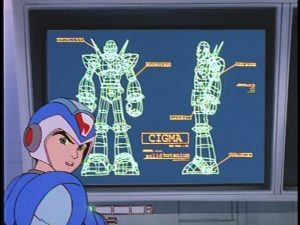 Sigma makes a brief appearance near the end of Mega X. His picture appears earlier in the episode. If you look closely, then you will see his name is misspelled as Cigma. Ruby Spears required Capcom’s approval for episodes and ideas for the show. I am surprised that this error slipped under Capcom’s radar. 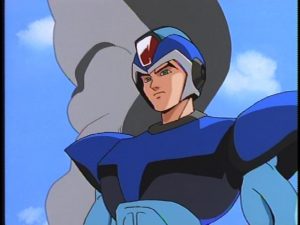 Mega X is an awesome episode to market Mega Man X. The maverick hunter’s personality is drastically different from his persona in the video games. Mega Man’s futuristic cousin does not hesitate to pull the trigger and fire his X-Buster. This episode is also Mega Man X’s only appearance in a Mega Man cartoon if you do not count the OVA from Maverick Hunter: Mega Man X. 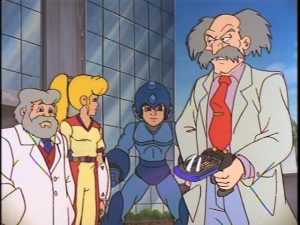 Dr. Wily creates a purple device that instantly reprograms a robot under his command. This device is revealed in the first episode. Dr. Wily reprograms Guts Man, Cut Man, and Ice Man. However, he does not use the device on Mega Man. He misses his prime opportunity to defeat the blue bomber! This device appears in several episodes, and is only used on the Robot Masters.

7. Do not underestimate Roll! 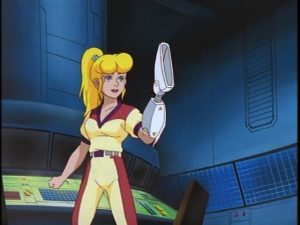 Roll is always ready to help Mega Man in battle. She always finds a way to help her brother. Additionally, her weaponry is very effective against Robot Masters. She has defeated Robot Masters on many occasions. She blends Elec Man to pieces, and wins a boss battle against a robotic hairdresser. 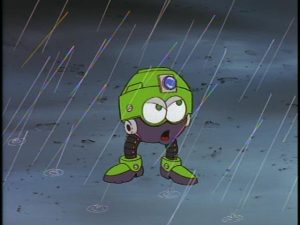 Eddy retains most of his original design from the game. However, his color is changed to green in the show. He is in several scenes with Rush. I think the development team did not want Eddy to blend in with Rush. This is just a theory.

Guts Man and Cut Man are created by Dr. Light to work dangerous jobs. Guts Man is designed to work in construction, and Cut Man is designed for limber jobs. Unfortunately, neither Robot Master is intelligent enough to properly work in these fields. They would have been major liabilities on the job. One mistake can injure a fellow worker. Their stupidity is shown in every episode as they fail to defeat Mega Man for Dr. Wily. 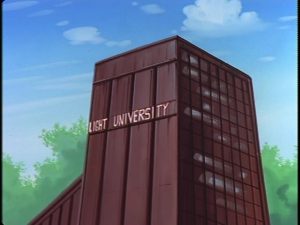 The episode Campus Commandos introduces college for robots. This concept appears to be strange, and it needs an explanation. Why does Light University exist in the classic series?  Dr. Light says the school will research robotics, but also claims it will provide an education to robots. Scientist can program a robot’s intelligence, thus the robot will know everything that it needs for daily duties. Furthermore, this university would not help robots progress. Robots cannot function beyond their prime programming.

Light University appears to be a scam with a robot football team, mysterious student’s funds, and a lack of campus security. The school’s funding is most likely coming from the federal government. How do robots summit forms to FSA? Furthermore, the football team only has robot players. Who are their rival schools? Dr. Light has a lot of explaining to do!