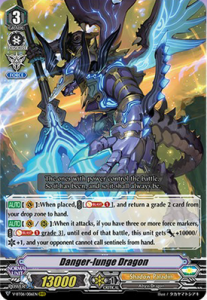 The ones with power control the battle. So it has been, and so it shall always be.

[AUTO](VC):When placed, COST [Soul Blast (1)], and return a grade 2 card from your drop zone to hand.
[AUTO](VC/RC):When it attacks, if you have three or more force markers, COST [Soul Blast (1) grade 3], until end of that battle, this unit gets [Power]+10000/[Critical]+1, and your opponent cannot call sentinels from hand.

Danger-lunge Dragon’s first effect adds a grade 2 card from the drop zone to your hand. It’s a great ability to regain your best units. Then, call the card to the field for additional offense for the front row. In addition, it is a useful ability against clans such as Kagero. It counters their ability to retire your rear-guard because Danger-lunge Dragon regains your rear-guard from the drop zone.

In addition, Danger-lunge Dragon’s second effect requires three force markers. You can quickly achieve this requirement with Illusionary Revenger, Mordred Phantom’s effect. Mordred generates a Force marker when you call Blaster Dark. Furthermore, this requirement can be fulfilled in a single turn by calling two Blaster Darks. Then, Danger-lunge Dragon is ready to ride on your next turn.

Play these cards with Danger-lunge Dragon!

Danger-lunge Dragon is a useful card to play as a vanguard in the Premium Format. He is an effective vanguard in a generic deck. Danger-lunge Dragon effect activates when you ride him as your vanguard. His first effect targets many useful cards from Cardfight!! Vanguard G. Then, you may stride your G-Unit after using this skill, and create a combo with your new grade 2.

Search for these grade 2 cards in the premium format!

Overall, Danger-lunge Dragon is a powerful card for Shadow Paladins. I like this card’s design for the his clan. His effects complement his clan’s grade 2 units in both formats. You can play this card in a variety of decks. Danger-lunge Dragon is best suited in a deck with Illusionary Revenger, Mordred Phantom. He will be a nightmare for your opponent.