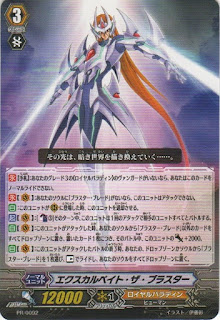 Various online trading card stores have announced that Exculpate the Blaster will be the promo card in Comic Style Vol. 1. You can get this powerful card by buying a brand new Comic Style Vol. 1 booster box! Exculpate The Blaster made his debut in the manga’s fifth volume. Aichi played this card to overcome Ren’s powerful Shadow Paladin deck. Although the manga does not have an official English release. You can find translations throughout the Internet. Exculpate the Blaster is one of the most powerful units in the game. He is great for a unit to use for the final turn. However, he is difficult to call. You need Blaster Blade in the soul and a Grade 3 unit in the Vanguard circle to call Exculpate the Blaster. He is a perfect fit for any Blaster deck!
Comic Style Vol. 1 contains cards that are exclusive in the manga. Exculpate the Blaster’s promo fits perfectly with this booster set. Besides happy Royal Paladin players, Nova Grappler fans will also be happy. This set also contains the entire famous Raizer series. Kagero, MegaColony, Murakumo, Pale Moon, Oracle Think Tank, Spike Bros, and Tachikaze will also be receiving more support!
Sources: Pojo Forums: http://www.pojo.biz/board/showthread.php?t=1100703