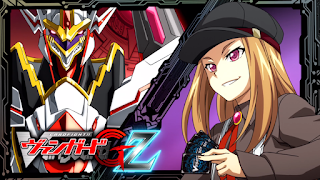 Star-vader, Chaos Breaker Dragon is a villain from Cardfight!! Vanguard Link Joker and he has returned to the G series! He led Link Joker’s special army, the Star-vaders. The entire clan was originally created by the Void and destroyed numerous planets before some members of the clan became heroic Messiahs. Chaos Breaker is responsible for corrupting many warriors on Cray and reversing them into servants for Link Joker. He is the only surviving general from Link Joker after the invasion. He is now one of the six apostles for Dragon Deity of Destruction, Gyze.

Chaos Breaker led Link Joker’s invasion of Cray in season three. He earned the nickname the clown for using cruel tactics on his enemies. He would provide hope to his enemies, and drown them in deep despair. He defeated the Jewel Knights and forced Pure Heart Jewel Knight, Ashlei to submit to Link Joker. Chaos Breaker reversed Cray’s mightiest warriors into weapons for Link Joker.

Link Joker was on the verge of victory until Aichi, Blaster Blade, and Alfred turned the tide of the war. Aichi defeated the Void’s agent and Alfred destroyed Omega. Chaos Breaker and his army were forced back to Cray. Chaos Breaker survived the war and would not return for many years. He lurked in space and kept an eye on Cray. 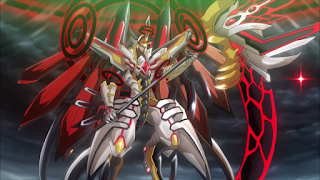 Link Joker was revealed to be the Void’s avatar in season three. The agent said Link Joker is the Void’s avatar and has destroyed many planets on its path towards Cray. The Void is humored to be created by Gyze. If this is true, then the other apostles are unaware of Chaos Breaker’s significance. Chaos Breaker is the only apostle to set foot on Earth. Him and many Star-vaders attacked the Earth in season three. However, they were forced back to Cray after Aichi defeated the Agent.

What was Chaos Breaker’s Original Mission?

Blue Wave Marshal, Valeos revealed the origins of Fides. The legendary holy sword sealed Gyze and the original Aqua Force. It is the only weapon able to harm Gyze. The Star-vaders finally arrived on Earth in the final episodes of season three. Chaos Breaker made his entrance known to the world as he stood above the building to watch the final card fights. His original mission may have been to destroy Fides and release the Zeroth Dragons. He could have carried out the mission if he was able to remain on Earth. 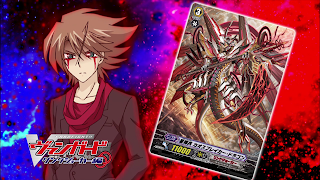 Star-vader, Chaos Breaker Dragon was Kai’s avatar during the Link Joker arc before he switched decks at the end of the season. They were a dynamic duo. Chaos Breaker and Kai defeated Aichi’s Liberators in a major battle. Kai returned to his roots and played Dragonic Overlord in his final games for the season. Here is a fun fact. Kai is undefeated with his Chaos Breaker deck.

A possible confrontation has been teased since last season in Cardfight!! Vanguard G Next. Kai expressed his desire to capture Chaos Breaker. He shows great anger when he hears Chaos Breaker diffrode with Noa. He has a personal agenda to handle unfinished business. I want their history to mention in their confrontation. Kai must win this fight or I will riot!

Evil God Bishop, Gastille encountered the Star-vaders’ leader in the Relics. Gastille initiated Chaos Breaker in Gyze’s apostles. Chaos Breaker learned a new method to return to Earth from Gastille. He performed an illegal diffride with Noa Hoshizaki. Noa is his current host. Noa is a young boy and member of New Nippon. Chaos Breaker sees Noa as a Barbie doll and dresses his host as a girl. His treatment of Noa reveals his dark nature. He enjoys triggering negative emotions in his enemies. 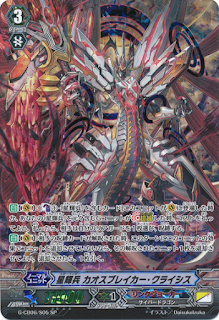 I am questioning Chaos Breaker’s true intentions in the current war. Chaos Breaker wants to see which group will be victorious. He appears to be withholding information with his fellow apostles. He is the only apostle to physically appear on Earth. He invades Earth in episode 160 of Cardfight!! Vanguard’s three season. The other apostles appear to be unaware of his history. They said they were not able to travel to Earth before Chrono triggered their arrivals.

Chaos Breaker is one of the best villains in the series. He is ruthless and will break his opponent’s hope for a better world. I want to learn more about his history before the series started. We learned histories of Blaster Blade and Blaster Dark. Chaos Breaker is in the same category of being a legendary character for being a major threat to Cray. His origins could connect many missing pieces to Cardfight!! Vanguard’s story. He most likely has a sinister scheme for this current season. I am looking forward to seeing his scheme in Cardfight!! Vanguard G Z!