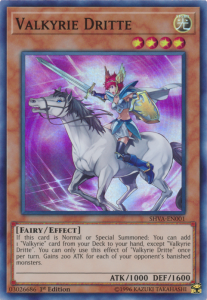 If this card is Normal or Special Summoned: You can add 1 “Valkyrie” card from your Deck to your hand, except “Valkyrie Dritte”. You can only use this effect of “Valkyrie Dritte” once per turn. Gains 200 ATK for each of your opponent’s banished monsters.

Valkyrie Dritte is a level 4 monster and a member of Valkyrie. She is one of the original Valkyries from the anime. She has an appearance of a warrior like all monsters in the archetype. I like her artwork as it fits well with Valkyries. However, she is a fairy type monster.

Valkyrie Dritte makes her debut in the anime’s 194th episode. Zigfried von Schroeder plays this card during his duel against Seto Kaiba. He uses this card’s full potential throughout the banish. However, Seto Kaiba destroys one of Zigfried’s copies. Then, Zigfried tributes Valkyrie Dritte to summon Fortune Chariot.

Valkyrie Dritte’s first effect adds a monster with Valkyrie in its name from your deck to hand when she is normal or special summoned. This card’s effect is a great tool for searching for your best Valkyrie monsters. You gain a card without paying any cost. If the effect is free, then I am totally willing to accept it! Then, you have the right monster in your hand to summon on your next turn.

Play these cards with Valkrie Dritte!

Overall, Valkyrie Driette is a useful card for Valkyrie decks. Her best effect is adding a Valkyrie from your deck to your hand. It is a great skill for quickly getting access to your deck’s best cards. This resourcefulness demands two or three copies of  Valkyrie Driette in a deck. She adds consistency and efficiency to Valkyries.