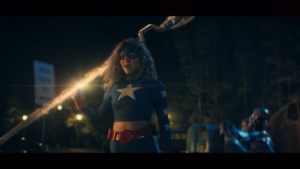 The first season of Stargirl is the revival of the Justice Society of America (JSA) and Courtney Whitmore’s journey of becoming a superheroine with her own legacy. However, their journey is not an easy task. The writers clearly show the new JSA’s inexperience against Sportsmaster and Tigress in their first encounter with the duo. Everyone needs to gain experience in life to master their abilities.

Courtney is a bratty and rude step-daughter at the beginning. She learns humility and patience. Courtney accepts Pat as her father. They do not share blood, but they have a strong relationship as father and daughter. The development of their family is one of the best plots in the overall story.

The new members of the JSA embrace their powers and role in the team. Beth is the new Dr. Mid-Nite, and provides support. Yolanda is the new Wildcat with freedom from her strict home. Finally, Rick inherits his father’s powers to become the new Hourman with powers for one hour per day!

Furthermore, every moment in each episode has importance or adds details to a character. There was not any needless filler to consume time. The writers fully used every moment to tell a story about the new JSA.

Shiv Part 1 & 2 are the best episodes from season one in my opinion. They set many plots for the season and future seasons. Stargirl and Shiv begin their rivalry. They have an amazing battle in the high school. This fight is Stargirl’s first major defeat, and the truth of her new life begins to reveal itself. Mike expresses his frustrations about Country’s time with Pat, and Barbara discovers the truth about her daughter. 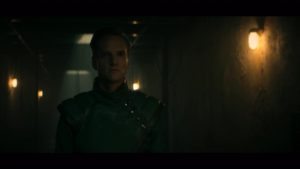 Every character is well written in Stargirl. The story has a solid foundation. The writer describes every character’s motivations, goals, and emotions. Courtney wants to create a legacy for herself as Stargirl. Hourman wants to avenge his father’s death at the hands of the ISA. Beth finally has friends and a social life.

In addition, the characters start at a point and grow throughout the season. The character with the most growth is Yolanda. Her origins will make you care about her and cheer for her. She has a terrible start because Cindy leaked her photos for Henry King Jr. Yolanda rediscovers joy and purpose in life when she becomes Wildcat. Yolanda is not the school’s wild girl, but she is Wildcat, a proud member of the JSA.

Brainwave is one of the delights of villainy. He plays a major role in the final episodes. Brainwave is a dark and sadistic man. Brainwave never hesitates when he tries to kill Stargirl, despite she is a teenager. He killed his son, Henry Jr. and his wife to fulfill the goals of the ISA. Furthermore, he shows no remorse for his family. He has no concern of anyone’s life but his.

The majority of the costumes have fantastic designs. Stargirl’s design has beautiful details. She has the stereotypical look for an All-American superhero. Wildcat looks fierce and powerful. A common thug would not want to meet her in an alley.

However, the worst costume is Beth’s costume of Dr. Midnight. The design is very a unusual outfit because her counterparts have feminine versions of the original costumes of Starman and Wildcat. Dr. Midnight’s costume looks the same on Beth without any alternations for her body type. It looks way too big and bland. It needs an improvement for season 2.

The best performance from the cast is Neil Jackson. He does an amazing job as Icicle. Jordan Mahkent appears to be a gentleman when he interacts with his employees and the public. He creates the tone of a wolf in sheep’s clothing in Blue Valley. The public is unaware of the ISA in the town. Icicle is truly an insane man, who does not care about the consequences of his actions.

Finally, the first season of Stargirl has many exciting fights with a lot of action. A few episodes lack some action due to the storytelling. The episodes with fights featured a lot of fun action. All of the characters demonstrate their abilities. Stargirl uses her skills in gymnastics with the Cosmic Staff for offense and defense. Icicle uses his abilities to freeze anything such as objects and innocent people.

Overall, the first season of Stargirl instantly makes it one of the best superhero shows on television. Stargirl has action, a good story, and a cast of strong characters. The show has the perfect combination of ingredients to deliver an entertaining show. The episodes without fights will keep you glued to the television with the wonderful storytelling. I am looking froward to season 2.

If you have not seen season one of Stargirl, then you do watch the entire series at The CW for free. You will not regret it. Watch the JSA deliver justice for Blue Valley.