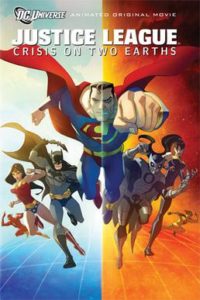 DC Comics and Warner Bros. released Justice League: Crisis on Two Earths on February 23rd, 2010. This film follows the Justice League on their mission to aid a good Lex Luthor from an alternate universe. The film is based on Grant Morrison’s graphic novel of JLA: Earth 2. The Crime Syndicate use their might for political power and wealth.

Justice League: Crisis on Two Earths was directed by Sam Liu and written by Dwayne McDuffie. The film was a financial success for DC Comics. The film earned $9.2 million dollars from domestic home video sales. 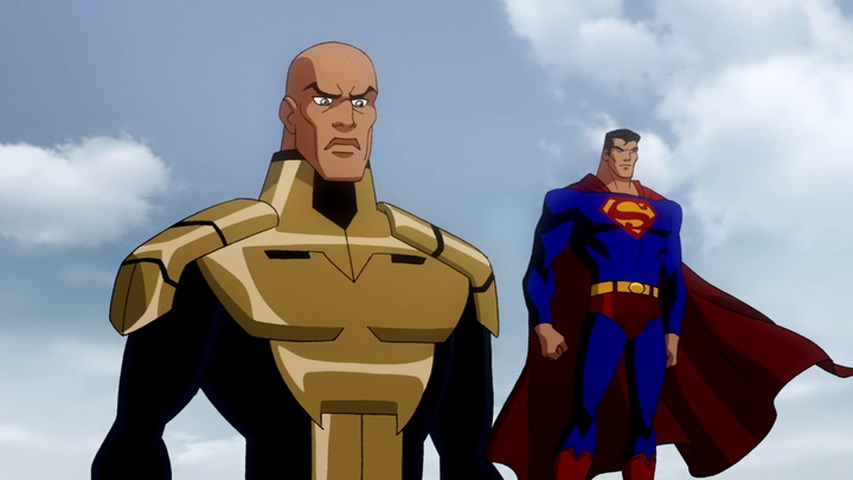 The movie answers the question if superheroes and villains made different decisions in their lives. The plot takes place in an alternate universe with roles in reverse. The Crime Syndicate is this universe’s evil version of the Justice League and Lex Luthor is a hero in this world.

However, the Crime Syndicate use their power to abuse the people on their planet. They made the decision to not help society and to only fulfill selfish desires. Ultraman wants to be the ruler of Earth, and the majority of his henchman want money and power. Owlman and Superwoman are psychopaths, who seek destruction.

In addition, this heroic Lex Luthor from Justice League: Crisis on Two Earths is another example for the use of power. He uses his brilliant mind to help humanity instead of destroying it. He seeks truth and justice for his Earth. This version of Lex Luthor is an interesting man. This version of the character adds a fresh dynamic.

Batman experiences growth during the film. He was originally against the Justice League’s decision to aid Lex Luthor from the alternate universe. A superhero’s responsibilities are not exclusive to one universe. Superman argue to help this alternate universe. Wonder Woman said their job is to help people.

Then, Batman realizes his mistake of not joining his comrades at the beginning. He joins the fight because he is a good man. A good man cannot sit and allow wrongdoings from horrible people. All life is precious on every Earth. He admits his mistake to Superman at the ending. 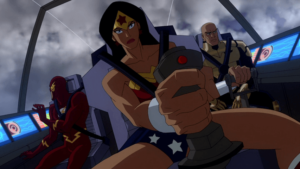 The film gives an awesome Easter egg to us. The film provides an origin for Wonder Woman’s invisible plane. However, she is not the original owner. Wonder Woman hijacks Owlman’s plane during an intense battle in the skies. She decides to keep it for her spoils of victory. 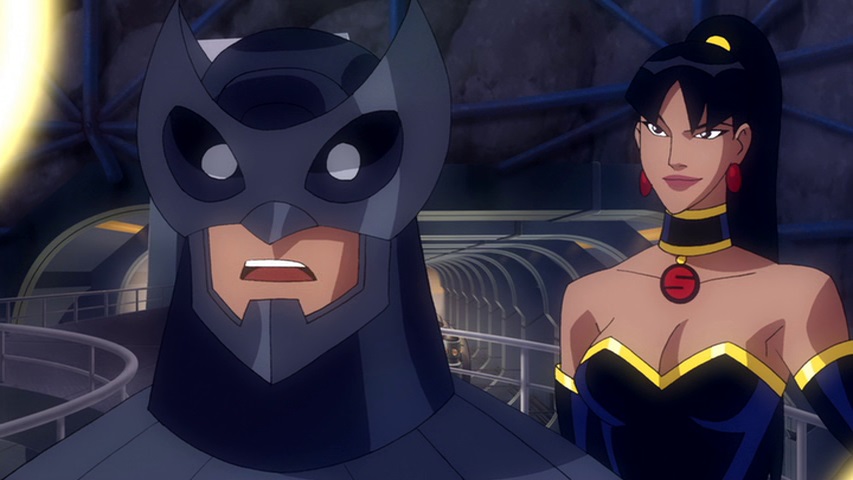 Owlman and Superwoman are a match made in hell. They have a romantic relationship, and they are a dangerous couple. These psychopaths have a twisted relationship with love for each other. Superwoman joins Owlman in his plan for complete annihilation, despite the the insanity of his goal to end existence. Their psychotic personalities with no regard to the life of other people attract them to each other. 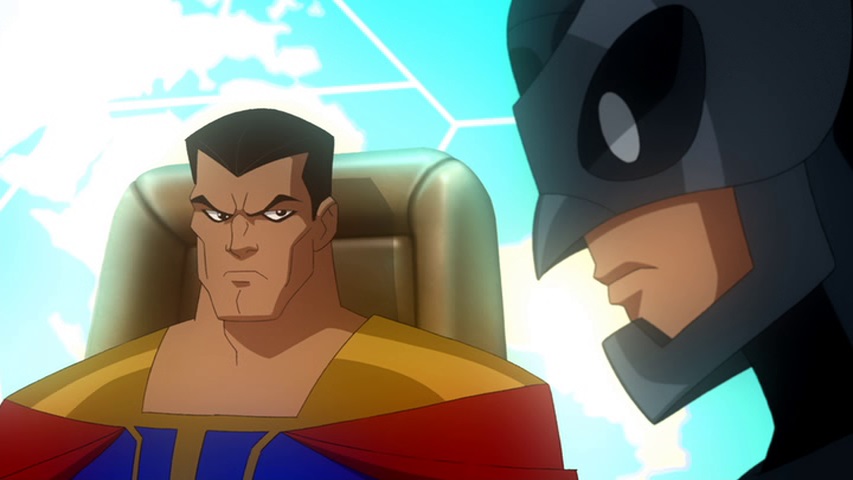 Most fans would expect Ultraman to be the main antagonist because he is the alternate universe’s version of Superman. However, this story has a twist on the main antagonist. Ultraman only seeks power, but Owlman has a larger picture than his comrade. Owlman is a psychopath with the insane plan to end existence.

Furthermore, this plan presents a major threat to all Earths. Only the counterpart of Batman would fall to the dark path with the ideal to end all life. Bruce Wayne has suffered many loses in his life. He has seen the worst of humanity. Owlman sees humans as cancer and he wants to eradicate humanity.

Justice League: Crisis on Two Earths delivers amazing battles throughout the film. Every fight has an important purpose for the plot. Superwoman and Batman clash in a battle for Quantum Trigger. Lex Luthor and Superman defeat Ultraman to bring him to justice before the president releases the villain from custody. 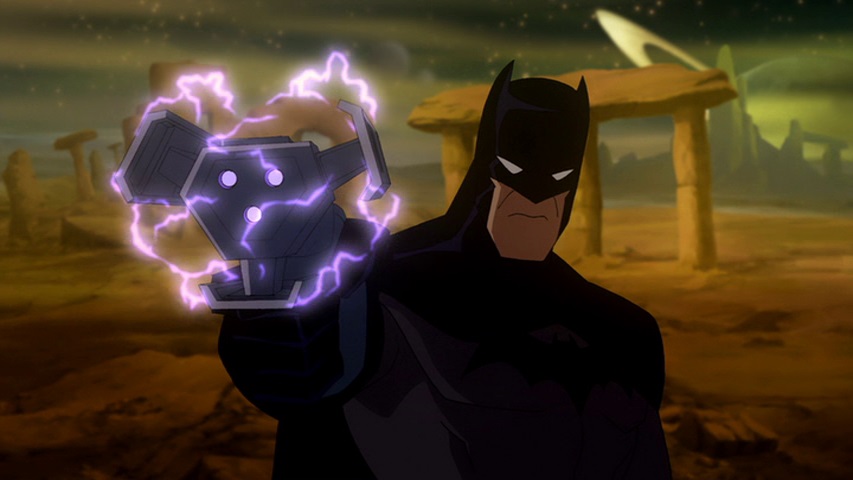 My favorite battle in the movie is battle with all of the counterparts during the climax. The Justice League needs to use technical skills with their powers to defeat enemies with the same abilities. The superheroes know not to underestimate individuals with the same powers. The Crime Syndicate is a dangerous group of villains with only the intentions to kill anyone in their wicked path.

For example, Green Lantern and Power Ring create different constructs to counter each other. Ultraman and Superman collide in an intense battle with their heat vision. The heroes win these battles with their experience and skills.

The final fight between Batman and Owlman set the perfect conclusion for the plot and theme. Batman is fighting for all life in existence and Owlman seeks destruction. Their opposite views collide with their fists and words about their views on the value of life.

In addition, the final battle is one of the rare moments of Batman killing a villain. He sent Owlman with the Q.E.D. bomb on an icy Earth without any hope for survival. Owlman dies alone.

The animation and characters’ designs have a similar style to the comics. Each character perfectly represents themselves from the comics. Wonder Woman dons her signature armor. Hal Jordan has his signature costume and ring.

Owlman, Superwoman, and Power Ring are my favorite designs from the villains. They have vile looks to fit their wicked personalities. Superwoman stands out with her dominant and powerful look.

The actors in Justice League: Crisis on Two Earths did an amazing job with their characters. Every character sounds believable when they deliver lines. Gina Torres has an attractive and dominant voice for Superwoman. Vanessa Marshall delivers a confident voice for Wonder Woman. Josh Keaton nails the fun and comedic performance as The Flash.

Furthermore, William Baldwin does an amazing job as Batman. He truly captures the tone and voice from the dark knight. William Baldwin perfectly expresses Batman’s serious tone for his attitude.

I recommend buying Justice League: Crisis on Two Earths on DVD or Blu-ray. You can find this film at Amazon. It is a great film for fans of DC Comics.