Today I decided to check out a different locals in town. My good friend told me about the store a few weeks ago and I was in the mood for a good cardfight! I have not played a cardfight and duel in over a year. The previous shop does not have any Cardfight!! Vanguard players and just one Yu-Gi-Oh! player. It was time to find a new shop.

The store is Rick’s Cards and Games and they sell Cardfight!! Vanguard, Yu-Gi-Oh!, Magic, sports memorabilia, and card game accessories. I did not know what to expect when I arrived at the store. The store’s owner and his wife are very friendly and easy to talk to! I felt welcomed there. They have a growing and promising Cardfight!! Vanguard group. Their Yu-Gi-Oh! group meets on Tuesdays. My friend who recommended me to the store came within a few minutes and was surprised to see me. We have not seen each other in over a year. He is preparing for the Nashville Regional Qualifier on October 25th.

This was my first cardfight using my Revengers! They were armed and ready to take down Dragonic Overlord the End! I was very amazed at how I perfectly guarded attacks in both matches. During the first match, my friend used Dragonic Overlord’s ability, retired both rear-guards, and failed to check a single trigger. He only checked Grade 3 units leaving his hand without any defensive cards. The second match’s final turn was awesome! I finished him off with The Dark Dictator! His Soul Blast gave me the cutting-edge to win the match. My powered up rear-guards were too much for Dragonic Overlord the End. However, I was a bit disappointed that I did not get the opportunity to ride Illusionary Revenger, Mordred Phantom  and use his Break Ride skill. I could have made some nice combo plays. 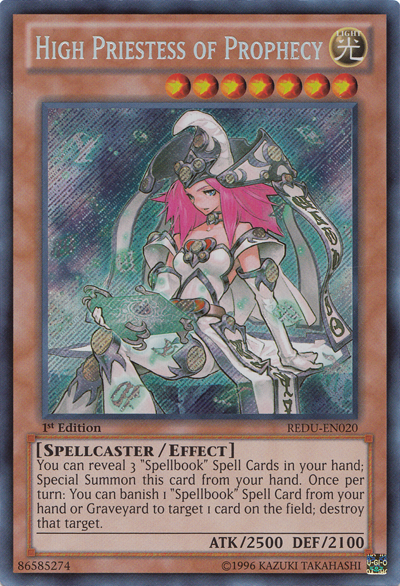 Today was a great opportunity for me to test my Supreme Spellcasters. However, it did not go as well as I expected. My friend played his Box of Friends deck.
The first two games were pretty competitive. My friend won the first match by using Box of Friends to swarm the field with powerful XYZ monsters. The Supreme Spellcasters shined in the second game. High Priestess of Prophecy controlled the field from start to finish. High Priestess of Prophecy and Dark Magician combined their magical powers into one amazing Dark Magic Attack for the win!  The deck worked to perfection. It worked exactly how it was made to control the field and beat-down the opponent. Finally, the third match was not close to being a good game. I drew a completely dead hand and lost in a few turns.

There are some changes that I need to make for the deck to be more consistent. I will be removing both copies of Endymion, the Master Magician to add a Spellbook of Eternity and one more High Priestess of Prophecy to the deck. I’m also going to remove all three copies of Strength of Prophecy to add two copies of The Eyes of Timaeus and one Magical Exemplar. Amulet Dragon and Dark Magician Girl the Dragon Knight will be added to the Extra Deck pretty soon.

Can’t Wait To Go Back!

My first experience at Rick’s Cards and Games was awesome! I definitely will being going back very soon! I finally have a store to go to play vanguard on a regular basis. The friendly staff were more than helpful and are interested in hosting tournaments in the future. I hope they are successful in starting tournaments for Cardfight!! Vanguard and Yu-Gi-Oh! because no other store in town is even close to having a group of players. Hopefully they will be carrying the new Dragon Ball Z Collectible Card Game booster set and starter decks! Maybe I will get a chance to record a few matches for my YouTube channel.