The return of Dragon Ball Z Collectible Card Game is less than three weeks away! Dragon Ball Z fans are excited for their favorite trading card game to make a comeback. Players new and old are gearing up for the greatest comeback since Brett Favre’s comeback in 2009 with the Minnesota Vikings. Goku, Gohan Krillin, Piccolo, and Future Trunks are the first five heroes to return as main personalities. Captain Ginyu, Frieza, and Vegeta are the first three villains to return as main personalities.

Check out a few cards from the upcoming starter deck and booster set! I also threw in one of Goku’s promo from the San Diego Comic Con!

Level 1 Goku Protector of Earth (San Diego Comic-Con Promo)
POWER:Energy attack costing 2 stages. DAMAGE: 3 life cards. HIT: You may discard a card from your hand to search your Life Deck for a Styled Drill and place it into play.

Level 4 Frieza Revived
POWER: Destroy the top 4 cards of your opponent’s Life Deck. Search your Life Deck for a Frieza Named card and place it in your hand. :You may also use Your Level 2 Powers

Blue Protective Mastery
Your opponent needs 6 anger to advance a personality level. POWER: You may discard a Physical Combat card from your hand to stop an energy attack or an Energy Combat card to stop a physical attack. If you discarded a Blue card, you may rise or lower a player’s anger 1 level. 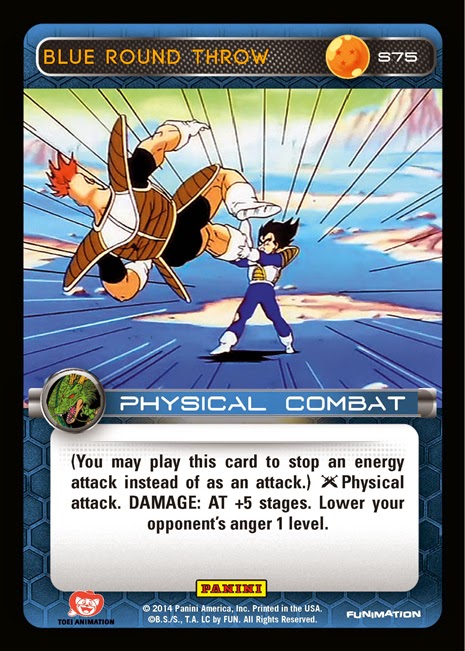 Blue Round Throw
(You may play this card to stop an energy attack instead of as an attack.) Physical attack. DAMAGE: AT +5 stages. Lower Your opponent’s anger 1 level.