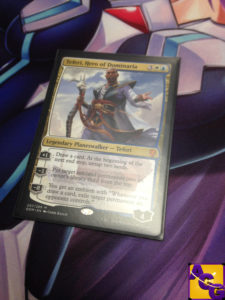 +1: Draw a card. At the beginning of the next end step, untap two lands.
−3: Put target nonland permanent into its owner’s library third from the top.
−8: You get an emblem with “Whenever you draw a card, exile target permanent an opponent controls.”

Teferi, Hero of Dominaria is one of the hottest cards on the current market. I pulled two copies from two random booster packs at my local game store. Teferi can be played in any deck with white and blue lands. He has three excellent abilities to give his owner major advantages. You want him to hit the board as soon as possible.

Teferi’s first skill allows you to draw a card, and you untap two lands at the end beginning of the next end step. You draw a card for free. You can quickly gain card advantage. This ability gives you quicker access to your library. The untapped lands can be used during your opponent’s turn to play Instants.

However, be aware that you must untap two lands. If you do not have any lands to untap, then you must untap two of your opponent’s lands if possible. This rule can lead to awkward plays. Your opponent may be able to play a card such as Lightning Strike to deal damage to Teferi. Then, your opponent may use another Lighting Strike during his or her turn to destroy Teferi. Always be sure you have two tapped lands to untap to avoid awkward plays that my hurt you.

Finally, Teferi’s third ability gives you an emblem with “Whenever you draw a card, exile target permanent an opponent controls”. Teferi’s third skill dominates the board. This ability can seal your opponent’s fate. You can exile creatures, lands, and planewalkers. You will always trigger the emblem after activating Teferi’s first ability!

Overall, Teferi, Hero of Dominaria is a great card for creating card advantage and controlling the board. Teferi becomes a priority on the board, and your opponent needs to remove him as soon as possible to avoid losing the game. The longer he remains on the field, the stronger he becomes. Once Teferi has enough loyalty counters to pay for his third skill, then you will have control over the board. There is nothing your opponent can do to stop you. Teferi is the ultimate hero of Dominaria!