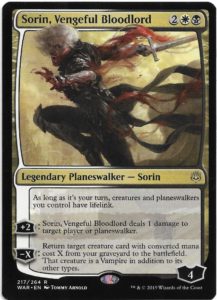 As long as it’s your turn, creatures and planeswalkers you control have lifelink.
[+2]: Sorin, Vengeful Bloodlord deals 1 damage to target player or planeswalker.
[−X]: Return target creature card with converted mana cost X from your graveyard to the battlefield. That creature is a Vampire in addition to its other types.

Sorin, Vengeful Blood Lord is a vampire with an expertise in black mana. He wears a black armor and wields a sword with stains of blood. He uses his wicked abilities to raise your fallen creatures and transform them into vampires. His story continues in War of the Spark. Sorin, Vengeful Blood Lord temporarily joins a truce with his rival, Nahiri to battle the Eternals of Bolas’ Dreadhorde.

Sorin, Vengeful Blood Lord returns a creature from your graveyard to the battlefield, and this creature becomes a Vampire in addition to the creature’s other types. This is a great ability for regaining a strong creature. Your graveyard becomes a second source for cards.

A good strategy is to play good cards with abilities that activate when they enter the battlefield. For example, Basilica, Bell-Haunt is a good creature to return from your graveyard. This spirit forces each opponent to discard a card and you gain 3 life.It is a nice ability to reduce an opponent’s resources. In addition, you recover life and many decks with Black mana want to recover life. Life is a key resource for playing the cost of abilities and staying alive in the game.