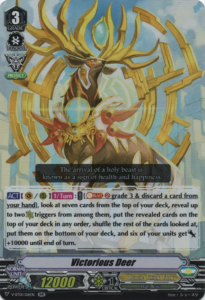 The arrival of a holy beast is known as a sign of health and happiness.

[ACT](VC/RC)[1/Turn]:COST [Soul Blast (2) grade 3 & discard a card from your hand], look at seven cards from the top of your deck, reveal up to two [Critical] triggers from among them, put the revealed cards on the top of your deck in any order, shuffle the rest of the cards looked at, put them on the bottom of your deck, and six of your units get [Power]+10000 until end of turn.

Victorious Deer’s skill looks at the top seven cards of the deck to place two Critical triggers on top of the deck and six of your units gain 10,000 power. The skill requires you to Soul Blast two grade 3 cards and discard a card from your hand. The skill should be saved for your finisher. Your field gains a total of 60,000 power. You are going to have two critical triggers ready for your vanguard and rear-guards. This is an overwhelming amount of power, and should win the game if executed to perfection.

Furthermore, we have a few options for soul charging. Imperial Daughter is the best option. First, she is a grade 3 for Victorious Deer’s Soul Blast. Second, her skill soul charges a card. Soul charge a grade three card if possible. The soul would be ready for you to ride Victorious Deer during your next turn.

However, you do not want Victorious Deer to be your first vanguard. Only ride Victorious Deer if it is your only choice for a grade 3 vanguard. Unlike Soul Saver Dragon, Victorious Deer does not have an ability to soul charge cards. He will be a vanilla vanguard without a skill. The only benefits of riding him first are to get a Protect marker, and setting up the soul for your second Victorious Deer.

Overall, Victorious Deer is the strongest finisher for Oracle Think Tank. I recommend playing two copies in a deck. A deck only needs two copies of Victorious Deer. It gives the clan the offense that it needs to seal games. Its only flaw is not having a second skill to soul charge if you are forced to ride it early in a game.