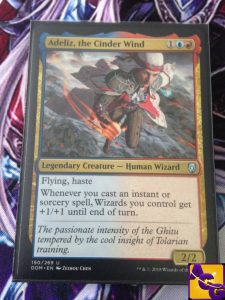 Whenever you cast an instant or sorcery spell, Wizards you control get +1/+1 until end of turn.

Adeliz, the Cinder Wind is a blue and red wizard with flying and haste abilities. I pulled this card from a single Dominaria booster pack. The card has wonderful art. It depicts a flying wizard with red and blue hands in a fantasy world. The card would look really nice as a foil.

Adeliz, the Cinder Wind’s skill states Wizards you control gain +1/+1 until end of turn when you cast an instant or sorcery spell. You can quickly stack power and toughness on every Wizard by playing multiple instant and sorcery spells every turn. For example, Adeliz’s P/T will increase to 4/4 if you cast two spells to trigger the ability. Adeliz also has flying and can avoid being blocked by your opponent if he or she does not have flying creatures or creatures with reach. He can immediately attack on its first turn.

Furthermore, we need Wizards with chemistry. All Wizards will benefit from Adeliz, the Cinder Wind’s skills, but I want to play cards that have the best synergy. You can come out of the gates strong with Ghitu Lavarunner. He gains haste as long as your have instant and sorcery cards in your graveyard. You will be playing instant and sorcery cards very often to meet these requirements.

Play these creatures with Adeliz, the Cinder Wind!

Play these spells with Adeliz, the Cinder Wind!

Overall, Adeliz, the Cinder Wind is a pretty good card. The card can become very powerful under the right circumstances. A field with many Wizards and a hand filled with instant spells can take control of a game. These cards may be weak individually. They are strong as a collective unit.