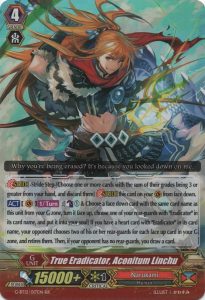 Why you’re being erased? It’s because you looked down on me.

[Stride]-Stride Step-[Choose one or more cards with the sum of their grades being 3 or greater from your hand, and discard them] Stride this card on your (VC) from face down.
[ACT](VC):[1/Turn]:[Counter Blast (1) & Choose a face down card from your G zone with the same card name as this unit, and turn it face up, choose one of your rear-guards with “Eradicator” in its card name, and put it into your soul] If you have a heart card with “Eradicator” in its card name, your opponent chooses two of his or her rear-guards for each face up card in your G zone, and retires them. Then, if your opponent has no rear-guards, you draw a card.

I always believed Linchu would become a fantastic card. He started as a forerunner named Ambush Dragon Eradicator, Linchu. He grew up to become the True Eradicator, Aconitum Linchu. Never look down on the little guy. His potential became a reality, and Linchu has reached amazing heights by reaching his full potential.

Fortunately, Eradicators have many classic units with Limit Break for hearts and only one unit from the G-era. The best heart is Eradicator, Dragonic Descendant “Sigma”, but Linchu cannot benefit from all of effects. He will only gain 10,000 power from the skill. The increase in power is useful in the Premium format with higher shields. Linchu will have a greater chance at breaking through your opponent’s shield.

Play these cards with Linchu!

Overall, True Eradicator, Aconitum Linchu is a good starting G-Unit for Eradicators. He excites his fellow Eradicators with his power of thunder! First, he forces your opponent to retire of his or her useful rear-guards from the field. Secondly, he provides early pressure and has synergy with many Eradicators with his ability massively retire an opponent’s rear-guards. I recommend playing a full set as you may want to use his skill twice against decks with skills to generate a strong in a single turn.