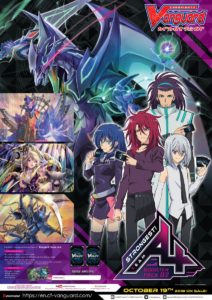 Bushiroad has changed the release date for VGE-V-BT02  Strongest! Team AL4 to October 19th, 2018. This change is only for the English edition. The set will release in Japan as scheduled on August 31st, 2018. Bushiroad stated the change was made because they want the product to meet their standards. I hope the production will be flawless.

Hopefully, this means there will not be any incorrect translations and misspellings. Bushiroad is notorious for misprints in nearly ever set. Maybe they are raising their standards to release a much better product. I hope that is the case for the sudden change in dates. I want Bushiroad to succeed and one of the best ways to success is releasing a high quality product.

Dear Cardfighters, the release date of VGE-V-BT02 had been changed to Oct 19th, 2018. This is to ensure that we can be confident in releasing a product that meets our standards, which cardfighters around the world can enjoy playing with and collecting. Thank you for your support! pic.twitter.com/60Whh3j0pj