Secret Village of The Spellcasters 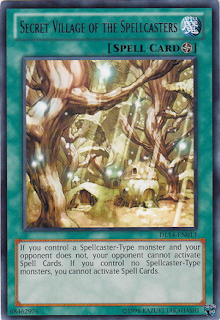 Secret Village of The Spellcasters is powerful because it limits your opponent’s option. They must have a Spellcaster on the field to use spell cards if not then they are limited to monsters and traps. This a huge advantage because nearly every deck depends on spells. Nearly half of your opponent’s deck is unplayable. They cannot activate a Mystical Space Typhoon to destroy Secret Village of The Spellcasters. Their only way around this problem is by activating a monster’s effect, trap card, or summoning Effect Veiler and then playing Mystical Space Typhoon. 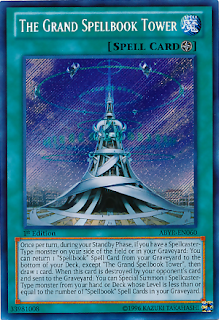 Once per turn, during your Standby Phase, if you have a Spellcaster-Type monster on your side of the field or in your Graveyard: You can return 1 “Spellbook” Spell Card from your Graveyard to the bottom of your Deck, except “The Grand Spellbook Tower”, then draw 1 card. When this card is destroyed by your opponent’s card and sent to the Graveyard: You can Special Summon 1 Spellcaster-Type monster from your hand or Deck whose Level is less than or equal to the number of “Spellbook” Spell Cards in your Graveyard.

The Grande Spellbook Tower is very easy to play. It is a searchable card with Spellbook of Secrets. A player would be able to activate the card very early in the game as soon as the first turn.

Furthermore, The Grand Spellbook Tower is famous for its draw engine. It returns one Spellbook spell card from the graveyard to the deck and then the player will draw a card. The player is drawing two cards per turn. Hand advantage is a major factor in Yu-Gi-Oh!.

Lastly, it is not easy to destroy. Destroying this field card is major consequences. A player will be able to special summon a Spellcaster from the deck whose level is equal to or less than the amount of Spellbook spell cards in the graveyard. A player would pretty much special summon a boss monster such as World of Prophecy or High Priestess of Prophecy.

In conclusion, both field cards are great in their own rights. There’s no going wrong with which card you choose for a Spellcaster deck. Heck you can even choose both of them to be in your deck. You can either limit your opponent’s options or draw an additional card per turn. Which field cards is better Secret Village of The Spellcasters or The Grand Spellbook Tower? Which field card is best for your deck? Discuss in the comments below!