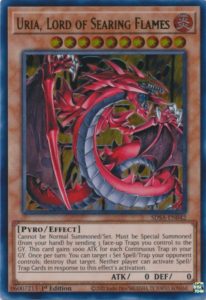 Cannot be Normal Summoned/Set. Must be Special Summoned (from your hand) by sending 3 face-up Traps you control to the GY. This card gains 1000 ATK for each Continuous Trap in your GY. Once per turn: You can target 1 Set Spell/Trap your opponent controls; destroy that target. Neither player can activate Spell/Trap Cards in response to this effect’s activation.

Uria, Lord of Searing Flames is a difficult monster to summon. It is the card’s major flaw. The first effect only allows you to special summon this Sacred Beast and you must tribute three continuous trap cards on your field. The effect has a high cost with a high level of difficulty.

This requirement is a bad effect for a special summon. The requirement of three trap cards on the field is a tough method. An opponent can easily counter this strategy. An only opponent only needs to play cards with the ability to destroy traps such as Mystical Space Typhoon. Jinzo prevents you from activating a trap card.

Furthermore, Uria, Lord of Searing Flames is a slow card. You cannot activate traps on the same turn that you set them. They are vulnerable to the opponent. You must wait a turn to activate them. The opponent can easily prevent the setup and destroy the continuous trap cards before you may activate them

Uria, Lord of Searing Flames’s best effect is destroying one of the opponent’s set spells or traps. It is a useful ability to destroy an opponent’s card in the back. For example, you can successfully avoid a powerful trap or you may destroy the opponent’s field spell.

Furthermore, this effect provides some control of the field. Uria, Lord of Searing Flames clears the path for the other Sacred Beasts. You can safely summon them if the opponent does not have a card to counter them.

The Sacred Beasts have support for its archetype and individual monsters. Continuous trap cards are the best support for Uria, Lord of Searing Flames. You need them for this monster’s full potential.

Play these cards with Uria, Lord of Searing Flames!

Therefore, the fusion summon is extremely difficult. You must successfully summon all three Sacred Beasts. Each monster requires a lot of resources.

Furthermore, Dimension Fusion Destruction and Armityle the Chaos Phantasm – Phantom of Fury are cards with a consistent method for the fusion summon of Armityle the Chaos Phantasm. You only need the Sacred Beasts in your hand, graveyard, or on the field. Dimension fusion Destruction does not require a lot of resources if all three Sacred Beasts are in your hand.