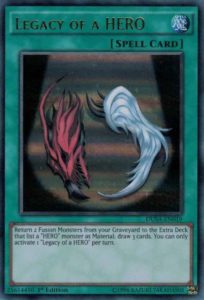 Return 2 Fusion Monsters from your Graveyard to the Extra Deck that list a “HERO” monster as Material; draw 3 cards. You can only activate 1 “Legacy of a HERO” per turn.

Legacy of a HERO is a resourceful spell. This spell’s effects returns two fusion monsters with a HERO as material to the extra deck and you may draw three cards. Legacy of a HERO provides many sources with one effect.

Legacy of a HERO provides a huge advantage of drawing three cards. The effect adds a lot of resources to your hand. You quickly gain access to key cards from the deck.

In addition, your extra deck regains two fusion monsters from the duel. The best monsters for HERO are the archetype’s fusion monsters. They have powerful effects and strong status. Legacy of the a HERO provides the opportunity to play these monsters again if you have the materials for the fusion summon.

Therefore, Legacy of a HERO helps you to make a huge comeback. Three cards can instantly turn the game in your favor. The effect requires some luck with the draw of each card. The right combination of cards may allow you to fusion summon one of the fusion monsters returned to your extra deck.

HERO has many powerful fusion monsters. You should consider Legacy of a HERO in a deck due to the opportunity from this spell card to replay some of your best fusion monsters. They return to to the extra deck. You may summon them again if you have the proper materials.

For instance, Elemental HERO Absolute Zero is powerful monster because he destroys all of the opponent’s monsters when he leaves the field. This card buys time for you to gather resources and counter the opponent. Legacy of a HERO puts this card back in the extra deck, and you may fusion summon this card again.

Play these Fusion Monsters with Legacy of a HERO!

Legacy of a HERO fits seamlessly in decks with HERO monsters. This spell card has the potential to set up combos if you draw a good combination of cards with its effect. It is a powerful card in combination with other cards with effects to draw cards. You are consistently getting resources for your strategy or to counter the opponent.

Elemental HERO Liquid Soldier is a great monsters in a deck with Legacy of a HERO. Both of these cards allow you to draw cards. You quickly get access to your best cards against a particular opponent. Each draw puts resources in your hand for combos.

Play these cards with Legacy of a HERO!

Overall, Legacy of a HERO is a staple for HERO decks. I recommend playing at least one copy of this card. You can consistently play it during the late game, and it helps you to make a comeback if you are losing the game. The graveyard will most likely have at least two fusion monsters. The ability to draw three cards and return fusion monsters to the extra is a huge advantage for Heroes..