Konami annoys me by unnecessarily censoring cards. I understand Konami censoring cards containing nudity. That’s respectable. However, most censoring is unnecessary. Is it a big deal for a female card like Dark Magician girl to have cleavage? Not really because most players are teenagers and adults. We are mature enough to deal with the subject matter. Sure we like the artwork! However, its not going to negatively change us. Konami is now taking it a step further. Gagaga Girl’s legs and arms were covered with more clothing. That’s just silly. How can a pair of arms and legs going to affect a player’s thoughts to do something wrong? They won’t negatively influence him or her at all. Konami please stop censoring cards! It’s just looks silly!

Bushiroad normally does not censor Cardfight!! Vanguard cards. but there are a few censored cards in Korea, China, and Singapore for cultural reasons. It would be very unnecessary to do so. Again the male players are going to like the nice artwork. However, we are still focused on the game play. If the card is very good then most players are going to play it regardless of the artwork. 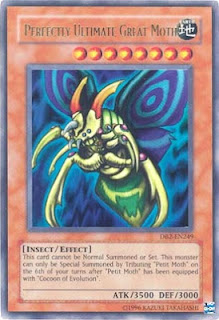 However, the same cannot be said for Yu-Gi-Oh!. There are many terrible and utterly useless cards in Yu-Gi-Oh!. What is so insulting is that many rare cards are very bad cards. For example, Perfectly Ultimate Great Moth is one of the most unplayable cards in the game. You have to wait six turns un-interrupted to summon Perfectly Climate Great Moth by tributing Petit Moth equipped with Cocoon of Evolution.

3. The Anime Should Use The Real Rules and Card Effects

Furthermore, I would like for Konami to make future Yu-Gi-Oh! series use the game’s real rules. It’s a little too late for Konami to incorporate this idea into Zexal. The anime would be more fun to watch and useful for players. There could be realistic game play scenarios. Players can learn real game tactics.

I hope you guys and gals enjoyed what Yu-Gi-Oh! can learn from Cardfight!! Vanguard!