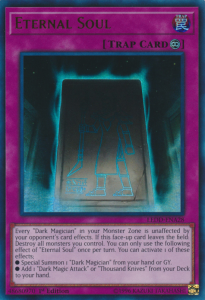 Every “Dark Magician” in your Monster Zone is unaffected by your opponent’s card effects. If this face-up card leaves the field: Destroy all monsters you control. You can only use the following effect of “Eternal Soul” once per turn. You can activate 1 of these effects;
● Special Summon 1 “Dark Magician” from your hand or GY.
● Add 1 “Dark Magic Attack” or “Thousand Knives” from your Deck to your hand.

Play these cards with Eternal Soul!